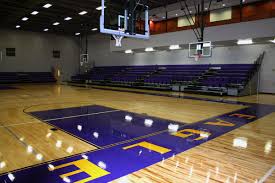 Montverde comes into the contest as the #1 ranked high school team in the country according to the majority of polls.  Findlay Prep has suffered a couple of losses this season but is still one of the top teams in the country.  Montverde is hoping to avoid a repeat of last year’s loss to Imhotep Charter out of Philly at this same point last season.

Mike Devoe hit a three to put the Eagles on the board first.  A mid-range jumper and then a transition basket by Bol Bol gave Findlay Prep an early 4-3 lead.  Andrew Nembhard hit a three for Montverde, then after a Findlay miss, Makhi Mitchell was fouled and made one of two free throws.  Kyler Edwards answered with a long two to bring Findlay back to within one at 7-6.  R.J. Barrett got into the score book with a slashing drive but a bucket inside by Bol and a three from Spencer Washington gave Findlay back the lead at 11-9 with 2:28 to play in the first.  Barrett scored again to tie the game.  A free throw from Barrett was offset by one from Edwards of Findlay and after one quarter of play the score was knotted at 12-12.

A pair of free throws by Reggie Chaney of Findlay gave them a brief lead but Montverde ripped off seven straight points as Devoe hit a three then scored in transition and Filip Petrusev connected on two free throws.  With just under six minutes before the break the Eagles led 19-14.  Another three from Edwards of Finlay got them closer but was answered by a driving basket from Devoe.  Bol then hit a three for the Pilots to get within 21-20 but a bucket inside by Mitchell and a transition basket from Barrett pushed the Eagle lead back to five at 25-20.  Jack Schwietz scored on a drive for the Pilots and after a mid-range jumper from Barrett, Bol hit another jumper to make the score 27-24 in favor of Montverde with 2:23 left in the half.  Nembhard scored on a drive for Montverde which was answered by a score from Edwards.  A bucket by the Eagles Karrington Davis made it a five point game but Bol caught and threw down a lob in response.  Barrett scored on a drive to end the scoring for the half which found Montverde up 33-28.

For whatever reason, Bol did not start the third quarter.  Montverde recognized that and took advantage of it.  Barrett dunked home a lob and hit one of two free throws and after Nembhard scored in transition the Eagles had a ten point lead at 38-38.  Findlay Prep final got on the board with a score inside from Chaney.  A few minutes later after a bucket inside by Mitchell, Montverde had their largest lead at 44-33 with 4:49 to go.  Even without Bol on the court, Findlay was unfazed.  They went on a 9-0 run as Chaney scored twice inside, Edwards had a steal and score and Nathan Mensah converted a three point play to make it 44-42 with three minutes left in the period.  At that point, Bol returned.  Montverde ended the drought with a score inside by Barrett.  Bol immediately produced a bucket and after a free throw from Barrett, Findlay Prep took the lead after Chaney dunked one inside and Edwards scored as well to give Findlay a 48-47 lead.  Barrett scored inside to grab back the lead but a bucket inside by Bol just before the buzzer made the score 50-49 in favor of Findlay heading into the final period.

A free throw from Devoe tied the score at 50.  The teams traded buckets and leads for much of the final period.  With 2:13 left to play, Barrett hit one of two free throws to tie the score at 63.  He hit another free throw a couple of possessions later to give Montverde a one point advantage.  Findaly responded with a three from Washington to go up 66-64.  After a miss inside and a pair of missed free throws by the Eagles, Chaney stepped to the line for Findlay with 1:08 to play.  He hit the first but missed the second, leaving the door open for the Eagles with the score 67-64.  Devoe scored on a baseline drive to get within one at 67-66 with forty seconds to play.  Findlay turned the ball over with 25 seconds left and after passing the ball around looking for a good shot, Montverde took a timeout with 5 seconds left.  Somehow, Devoe was able to sneak open in the far corner.  He caught the ball and let it fly.  It found nothing but net with mere seconds left.  Findlay was unable to retrieve the ball in time for a shot and Montverde grabbed victory from the jaws of defeat with a 69-67 win.  The proverbial court storming ensued as the students are traditionally given Monday off from school if the Eagles win the tournament.

Devoe was named MVP after scoring 26 points in the contest.  Barrett finished with 22 points for the Eagles.