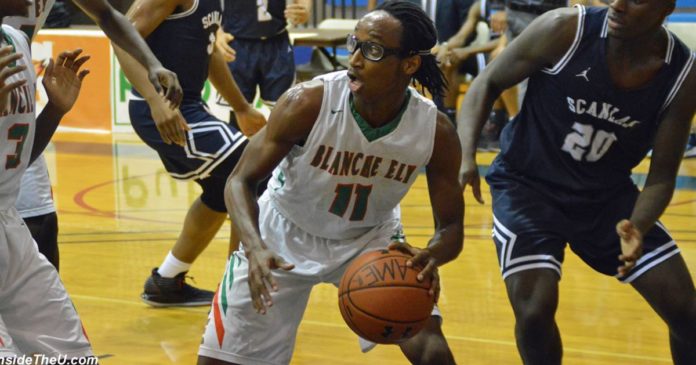 The high school season has ended and the travel team season will crank up soon.  Now is a good time for Source Hoops to dole out our annual End of Season Award.  First up: Most Valuable Player.  Remember, we define the MVP as the person who was most prominent in leading his team to playoff success.

Darion Wilson, Wildwood:  The senior was a key cog in helping the Wildcats take care of unfinished business after finishing second in last year’s 1A title game.  The Player of the Year as a junior in 2017, he was Wildwood’s go to scorer all season long and didn’t disappoint.  In his two games in Lakeland, Wilson put up 20 points and 8 rebounds in the semis and 23 points and 5 rebounds in the finals.

Neftali Alvarez, Miami Christian: The Victors played a tough schedule all season long to prepare for the playoffs and Alvarez paced the team with 27 points and 11 assists per contest.  He admittedly struggled in the semi-finals in the Victors’ win but come crunch time the next day, Alvarez led the team in points with 12, rebounds with 10, assists with 5 and steals with 5.

Berrick Jean-Louis, Fort Myers Canterbury: A one-man wrecking crew all season long, it is unlikely Canterbury would have made it to the Class 3A finals with BJL not playing at the level he did this year.  The top scorer, rebounder, and assist man for the team, he shot 14-20 over the course of the team’s two games in Lakeland.

Jose Placer, Oviedo The Master’s Academy: The leading scorer and do-everything guy for the state runner-up, Placer carried his team throughout the regionals as well as the final four.  In the semis, when P.K. Yonge got to within one point with three minutes to play, Placer scored six of the team’s final nine points to secure the win.  He went for a team-high 24 points in the final, twice as much as his closest teammate.

Dominic Pugh, Ocala Trinity Catholic: The junior guard paced the Celtics in scoring throughout the playoffs.  He had 28 in the regional title game, 14 points and 6 assists in a one-point semi-final win and a team-high 13 points in the title game.  One of the few underclassmen on this list, don’t be surprised to see Pugh’s name again this time next season.

Cordrayius Graham, Leesburg: The starting point guard for the two-time state champs is rarely the high scorer for his team but he is always the catalyst at both ends of the court.  His 8 points/7 assists/5 rebounds/3 steals performance in a one-point semi-final victory shows just how much he contributes while his 23 point outburst in the final (5-11 from the field; 12-14 from the line) proves he’s money in the clutch.

Diante Williams, Choctawhatchee: A 6’5 junior, he was everything and then some in the Indians’ run to the state finals.  Just like his sophomore season in 2017, Williams led the team in scoring, rebounding, assists, steals, and blocks.  Williams has a chance to land on this list again next season.

Michael Forrest, Ely: Those goggles fool you, but Forrest embodies what an Ely player is all about.  He’s tough, physical, cerebral, and maxes out his ability at both ends of the floor.  Not only did he score 18 and 21 points respectively in the semis and title game in Lakeland, he also led the team in assists and steals.

Brian Williams, Wellington: Wellington only lost one game all season.  Sadly, it was in to the title game to Oakridge but that doesn’t dismiss their run or the performance of Williams.  The guard did whatever the team needed to win.  He could go off for 20+ on any given occasion just as often as set up teammates for easy scores.  Williams tossed in a team-high 25 in the semi-final victory over Miramar.

Bryan Greenlee, The Rock School: The Lions were the fourth seed in the SIAA state tournament but knocked off both #1 seed West Oaks Academy and #2 seed Victory Rock Prep on successive nights to take home the state title.  Greenlee was impressive in both contests, deftly handling the defensive pressure that those two squads are known for.  He was named first team all-SIAA for his efforts.