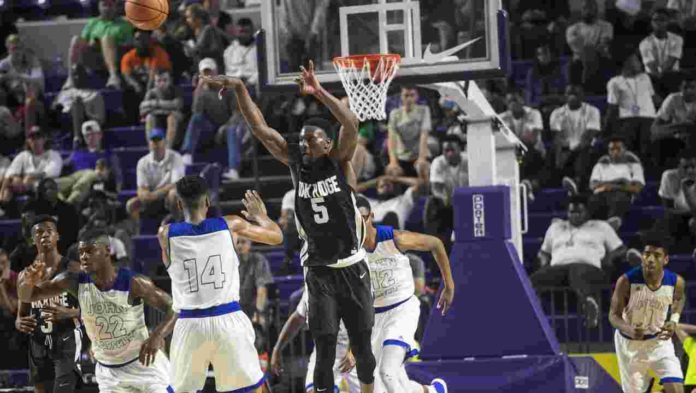 While the Most Valuable Player award hinges on the player’s ability to push his team to great playoff success, out definition of the Most Outstanding Player is different.  The MOP to us is the best player, period.

Kevon Godwin put up some serious stats this season: 23.7 ppg on 52% shooting from the field overall (36.1% from beyond the arc) and 72% from the foul line.  Godwin also contributed 5.9 rebounds, 4.4 assists, and 2.4 steals per contest.  In the final four, he was the leading scorer in both the semi-final and the title game.

We do our best not to repeat MVP and MOP awards but in the case of Class 2A and Miami Christian’s Neftali Alvarez, there really is no getting around it.  The Victors may have played the most challenging schedule in the state and yet Alvarez finished with season averages of 27 points and 11 rebounds a contest.  His ability to get to the basket and collapse defenses translates into open looks for his teammates, making the game easier for them.

Nassir Little embodies the definition of hard work.  He went from being primarily an athlete on the basketball court as a freshman at Orange Park Oakleaf outside of Jacksonville to a McDonald’s All American and North Carolina signee as a senior at Orlando Christian Prep.  That doesn’t come without putting hours in the gym and the weight room, as well as producing at a high level against other high level players.

Admittedly, we have been watching Zack Scott since he was in the seventh grade playing up a year with a talented Miami City Ballers travel team.  He’s been the small school South Florida Player of the Year twice and will no doubt earn that award a third time this season.  In his first true season as “the man”, Scott could have gone off and put up big point totals.  However, that isn’t his style and Westminster Academy claimed another title because of it.

Vernon Carey, Jr. erupted in the spring and summer of 2017 as one of the top players in the 2019 Class while playing for Nike Team Florida.  While surrounded by three other high-major players at U-School, it was still Carey that made things work as the team won the City of Palms, a state title, and garnered an invitation to the Geico High School Showcase at the end of this month.  A force to be reckoned with in the paint, Carey also has the skills to step outside and make plays, posing a serious dilemma for the opposition.

Elijah Weaver went back home this season.  After spending the previous two years at Oldsmar Christian and becoming a high-major recruit in the process, a coaching change spurred to move back to Rockledge.  The University of Southern California recruit averaged 23 points, 8 rebounds, 8 assists per contest this past season.  One wonders if Rockledge hadn’t been in the same region as two-time state champ Leesburg how far the team might have gone in the playoffs.

While Father Lopez didn’t make it out of district play, Michigan signee Collin Castleton did all he could on the court to push the Green Wave.  His numbers of 24.7 points, 12.2 rebounds, and a whopping 5.8 blocks per contest were no fluke and put up against some solid competition.  His size and skill set should fit in very well with the Wolverines.

Serrell Smith, St. Pete’s mega-scoring guard, was quite impressive in his final season.  Once again he nearly dismantled famed Oak Hill on his own with a near-40 point performance in January.  In the Green Devil’s semi-final loss to eventual champ Ely he tallied 36 of the team’s 58 total points (62%).  Recently getting his release from Ol’ Miss due to a coaching change, don’t be surprised if Smith signs with a big-time program in need of perimeter scoring.

Off-court issues nearly de-railed his senior season, but Emmitt Williams was the one player that other teams simply couldn’t match up with in Oakridge’s run to a state title and national recognition.  The LSU signee contributed nearly 21 points, 14 rebounds, and 2.5 blocks a game.  Unaccounted for in those numbers are the instances where a dunk or a blocked shot by Williams gave the Pioneers the dose of energy needed to pull out some big wins against a national schedule.