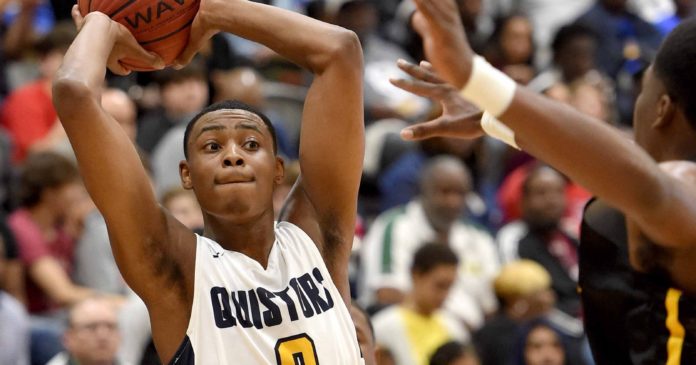 The consolation semi-final features Olive Branch out of Mississippi with Memphis signee D.J. Jeffries taking on a Paul VI team out of the tough Washington Catholic Athletic Conference in our nation’s capital.

Josh Freeman of VI knocked down a long two and a three to give them an early 5-0 lead.  Joe Cooper of Olive Branch scored to put them on the board.  VI would stretch their lead to six at 10-4 with just under six minutes to play.  Olive Branch would claw back to within three via the free throw line but a three from Trevor Keels made the score 13-7 in favor of VI.  Olive Branch hit a three and then a transition slam to get back to within one at 13-12.  From that point, VI would close out the quarter on an 11-4 run to lead by eight 24-16 heading into the second period.

Paul VI grew their led to ten after a transition basket by Keels.  That lead would still be ten after the teams traded a few baskets and with five minutes left in the half, VI was up 31-21.  Branch cut the lead in half after a three point play from Jeffries and a drive and score from Wes Taylor.  After a three from Jeffries, Olive Branch was back within two at 31-29 with just over one minute left in the half.  Avery Ford put back a miss for VI to push their lead to four on the next possession.  Jeffries once again had an answer for Olive Branch but a three just before the buzzer by Ford made the half-time score 36-35 in favor of Paul VI.

The third period would be a back and forth affair.  Paul VI kept its lead until a three from Kyron Pleas tied the score at 43 with 4:42 to play in the quarter.  Olive Brach would eventually grab a 51-48 lead with just under three minutes to play, but Paul VI closed out the quarter on a 9-5 run, the last a put back by Josh Oduro to lead by one heading into the final period at 57-56.

In the fourth, it looked like Olive Branch would win going away as they opened up the period on a 13-2 run to lead by nine at 69-60 with 3:37 left to play.  Paul VI didn’t go away and got back to within five at 69-64 with just under three to play.  A transition basket by Cooper pushed the lead back to seven at 71-64 for Olive Branch.  Paul VI wasn’t done as they put together an 8-0 run, the last points coming on a pair of free throws by Oduro to lead 72-71 with thirty seconds to play.  Olive Branch still had life and after a time out, Pleas found himself open on the left corner and swished a three with three seconds left.  Paul VI got a good look after a time out but the shot didn’t fall.  Olive Branch held on to win a thriller, 74-72.

Olive Branch was led by Jeffries with 23 points while Cam Matthews hit for twenty and Cooper tallied 11 points.

For Paul VI, Freeman paced them with 20 points while Keels added 16 points, Oduro scored fourteen, and both Knasir McDaniel and Ford each added ten points.