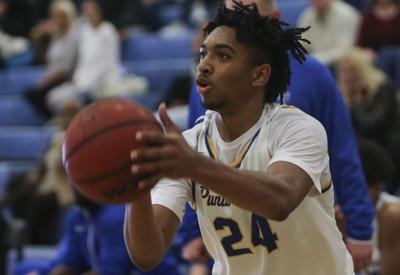 The last of the challenge round games features hometown Charlotte taking on Kissimmee Osceola, playing without Josh Marte, their starting point guard who tweaked his knee in last night’s loss.  This would be solid preparation for each team as they head into district play in the new year.

A mid-range jumper from Isaiah Palermo put Osceola on the board first but Charlotte answered with a three from Makai Reeves.  The teams would go back and forth until Osceola tied the score at nine after a driving basket from Jaduhkiss Soto.  Charlotte then ran off eight straight points, the last two on a mid-range jumper from Reeves to lead 17-9 with just under three minutes to play.  A three from Osceola’s Tyvion Woddard and a two from Palermo got the Kowboys back to within three.  Ahmad Johnson of Charlotte upped their lead after a baseline drive but a three by Josh Chapman for Osceola made the score 19-17 in favor of Charlotte after the first quarter.

The second quarter found Charlotte running on all cylinders as they outscored Osceola 11-3 over the first 4:30 of the period to lead 33-20.  A pair of baskets from Osceola’s Joshua Blazquez cut the deficit below double digits but two baskets from Tre Carroll offset a bucket from Palermo to end the half with Charlotte in control 37-26.

Osceola turned the tide in the third period, opening up with a 12-4 run to draw within 41-38 with 4:43 left in the period.  Kenny Scribner of Charlotte knocked down a three to get the lead back to six.  The teams would trade baskets for a while and with 1:29 left to play in the quarter, Charlotte led 52-46.  The Kowboys finished out the period on a 5-0 run, the last one on a steal and score from Armani Thomas, to draw within one at 52-51 with one quarter left to play.

The Tarpons regained control to start the final period, outscoring Osceola 10-4 to build a 62-55 margin.  Osceola didn’t quit and with just under three minutes to play had fought back to within one at 64-63 after a three from Thomas.  Charlotte’s Carroll scored on a drive to push the margin back to three but Osceola took a one point lead at 67-66 after a free throw from Palermo and a three from Soto with fifty seconds remaining.  Charlotte took a time out and came out with a beautifully executed play to score inside with forty seconds left to lead by one at 68-67.  Osceola missed on a three point attempt and Charlotte was able to hold the Kowboys off at the foul line to win by a score of 71-67.

The Tarpons were led by Johnson with 26 points.  Carroll finished with 16 points while Reaves connected for 12 points.

For Osceola, Palermo led the team with 17 points while Soto tallied 14 points and Blazquez added 13 points