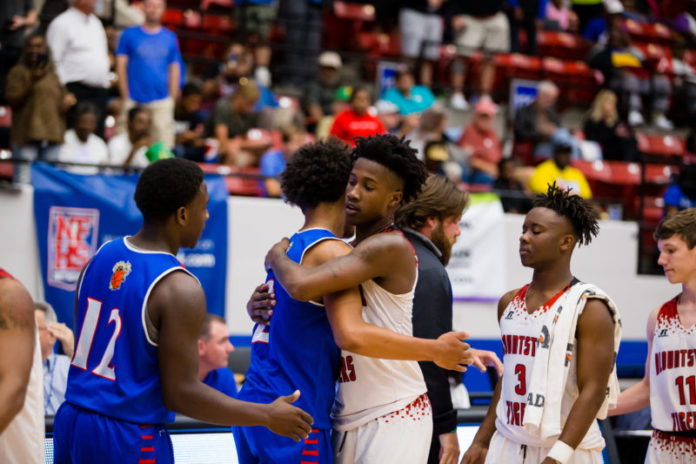 If he played in a metropolitan area such as Orlando, Tampa/St. Pete, or South Florida, Kevon Godwin would most likely have multiple D-I scholarship offers.  If the 6’1 senior guard had played on any of the “shoe circuits” this past spring and summer, his college destination would probably be already decided.  However, Godwin plays his high school ball in Blountstown, a Class 1A school an hour southwest of Tallahassee and played on the circuit with NW Florida Dream, a team not often found playing in front of a throng of college coaches.  Toiling in the shadows, he’s the best player you don’t know about…until now.

A multi-sport athlete that excels as well in football (safety/wide receiver) and track (4×400 relay; triple jump), Godwin prefers hoops.  He is quick with the ball and looks to advance it up the floor the fastest way possible, always on the look out for teammates that have gotten ahead of the defense.  Godwin could easily average far more than his current 24 points a game, but he looks to get his teammates involved as much as possible.  Whether in transition, facing various pressure defenses, or on drives to the rim, he’s got his head up and delivers catchable passes to open teammates for good shot attempts.  Godwin shoots nearly 40% from beyond the arc and consistently beats his man off the dribble to score at the basket.  He appears to be an effective leader on the court, routinely getting his teammates in the right position to face differing defenses.

Yes, Godwin has holes in his game he needs to fill.  Defensively he often plays like a safety, floating more and looking to make tips and steals than defending his man or being in the correct help position.  He certainly has the quickness and lateral foot speed to be a tough on ball defender but like most players at this age level Godwin while try to reach in or swipe from behind and gets caught for a cheap foul.  Goodwin is such a good shooter from behind the three point line and scorer at the rim that there are questions about his mid-range game, ability to read and make the right play coming off of ball screens, and scoring with floaters over bigger player in the lane.  Finally, people will legitimately question the numbers put up against small school competition.  That will be there until he’s given an opportunity to prove otherwise.

Hopefully, Godwin will get a chance to participate in a few post-season All-Star games as well some spring exposure events to prove himself against some higher level talent.  We’ve seen all of the guards in Florida’s Class of 2018 that have signed with mid-major D-I schools multiple times and there is no doubt in our minds that Godwin is as good as any of them.