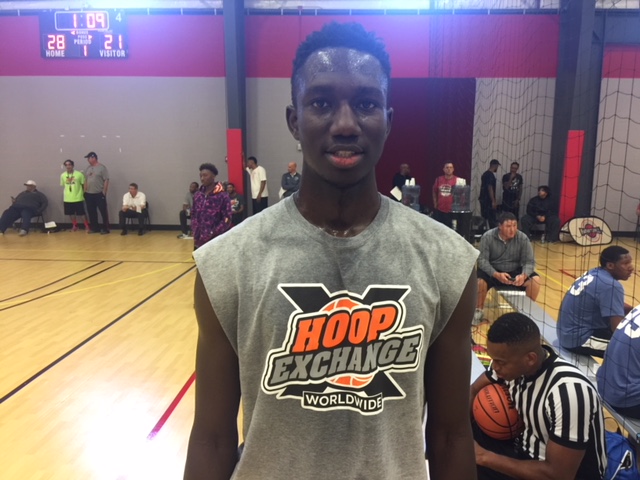 It was a full weekend at the USBI Arena at the Cooper Palms Sportsplex in Apopka.  The Hoop Exchange held their annual Spring Player Showdown, starting Saturday with well over 100 players from the Classes of 2020 and 2021 while Sunday was devoted to Juniors (2019) and Seniors (2018).  We will have multiple reports from both days but for now let’s cover who the Source Hoops Honchos thought were the best performer, as well as most surprising performer, in each class.

We came away very impressed with 6’8 Madiaw Niang from DME Sports Academy out of Daytona.  A high level athlete with a solid frame, he has the ability to grab rebounds at the defensive end and push the ball up the floor on his own or quickly hit the outlet.  He gets from rim to rim swiftly, routinely beating his defender down the court.  A decent passer and straight-line driver for two or three dribbles, his half-court offense right now is most effective inside the arc.  Niang did drop an open three in the contest we watched but that part of his game will need to develop more before it becomes a consistent weapon.  Defensively, he’s got the lateral quickness and foot speed to switch out onto smaller defenders in ball-screen situations as well as a willingness to battle physically in the paint.

The surprise senior for us was Niang’s teammate at DME, Assane Diouf, a 7’1 load inside.  While not completely raw, he still has a way to go in terms of skill and game awareness but his size, strength, and aggressiveness are hard to find.  Diouf is far more likely to over-power foes around the basket than finish with finesse in the lane.  He had one instance where a quick spin move baseline got him open and he attempted to violently dunk the ball, only to find himself a bit out of range.  He runs the floor and leaps relatively well for a player of that size.  It may take a while but don’t be surprised if Diouf helps some mid-major team to an NCAA tournament down the road.

Omar Payne of Kissimmee Osceola brought the pain to the event on Sunday and it’s a good thing that the arena has breakaway rims.  The lengthy 6’9 junior did his best to dunk the ball at every opportunity and he had several.  Lobs, offensive rebounds, and transition baskets all seemingly ended with the backboard and rim in a seizure after Payne finished off a play.  He also showed a much better ability to finish thru contact around the basket on Sunday.  His length and quick leap usually make him first to any rebound at either end of the court.  Defensively, no shot went unchallenged in the lane on his watch and many of those blocks he kept in play instead of just swatting them out of bounds.

It is difficult to single out one player as the surprise of the 2019 Class from Sunday.  Not because there were so many, but because there were so many we had already seen.  Looking back over our notes, we realized just how effective 6’3 wing Cyrus Largie out of Hialeah Mater Lakes Academy was in our viewing.  He didn’t fall into the selfish, ball hog chasm that so many players do at events like this.  He contributed in different areas such as offensive rebounding, quickly getting the ball off the defensive boards and pushing it ahead, and using his length to be disruptive on defense.  Largie made his lone jumper of the contest but for the most part made the most of his opportunities in transition and around the basket.

Coming off of a state title earlier in the week, 6’0 guard Marcus Niblack of Wildwood continued his stellar play over the weekend.  Niblack has a high skill level and routinely makes what look to be difficult shots.  He is quite crafty and creative with the basketball and uses those traits to gain separation from the defense to squeeze off shots.  His range is quite deep on his shot and if overplayed he will get by the defense and find a way to score in traffic.  We have yet to see Niblack in a role where he is not a primary scorer but more of a facilitator but his basketball IQ suggests that won’t be a problem at the next level.

There is a great deal of undue pressure on a player when his father is an NBA great.  However, Zaire Wade seems to be taking everything in stride.  A 6’2 guard out of Plantation American Heritage, his game is much different than “pops”.  The lefty is a cerebral passer and does a great job of finding cutters and rolling ball-screeners for easy looks.  Wade plays at a quick pace and puts a great deal of pressure on the defense, whether it is pushing the ball in transition or attacking the basket with his dribble.  The jumper is not yet consistent but that should come in time.  By all indications from Saturday, Zaire is looking to make his own name with his own game.

Moussa Diabate, a 6’9 forward at Florida Prep in Melbourne, gets a bit extra consideration here as he played both days at the event, faring well each time that we saw him.  Coaches and scouts salivate over Diabate not necessarily because of what he is but because of what he can ultimately become.  He’s got length, runs the floor, is active around the basket, and is relatively skilled for a young big.  Diabate’s perimeter shot was a non-factor this weekend but he compensated by chasing offensive rebounds and consistently beating his man down the floor.  One of his more impressive plays came on Sunday against older players where he spun away from a double team on the baseline and after a dribble dunked the ball to the dismay of most observers.  Diabate also apparently doesn’t back away from a challenge.  After being barked at by another freshman who was also playing Sunday, Diabate went to work at both ends of the court, causing his accuser to not just quiet down but to switch off of Diabate on the defensive end.

If you go on MaxPreps and look for the top scoring freshman in the state that plays in the FHSAA, the name Dallan Coleman will appear at the top of the list.  The 6’4 wing from West Nassau HS west of Jacksonville had an impressive performance on Saturday.  While his jumper failed to fall later in the day, it was on target earlier.  Coleman is a big guard with a solid skill level and a high basketball IQ.  The son of a coach, he can play multiple positions and make an impact at each one.  Coleman has a solid handle and is tough to keep out the lane.  He doesn’t shy away from contact at the basket and is more than willing the challenge bigger defenders.  Coleman contributed well in the rebounding department and has the physical makeup to be a good on-ball defender as he gets older.

There was a smattering of players in the Class of 2022 in attendance on Saturday.  At the top of the list was Jaylen Martin, a 6’4 wing out of Crossroads Academy in Tallahassee.  More often than not, players that succeed in the pre-high school level because they are either much taller and/or more athletic than their peers.  While Martin is certainly both of those compared to a “normal” eighth grader, his skill level and apparent understanding of the game puts him on a higher plane.  His shot is solid, he handles the ball well, and he doesn’t seem to force plays.  He’s certainly one to keep an eye on when the next decade rolls around.