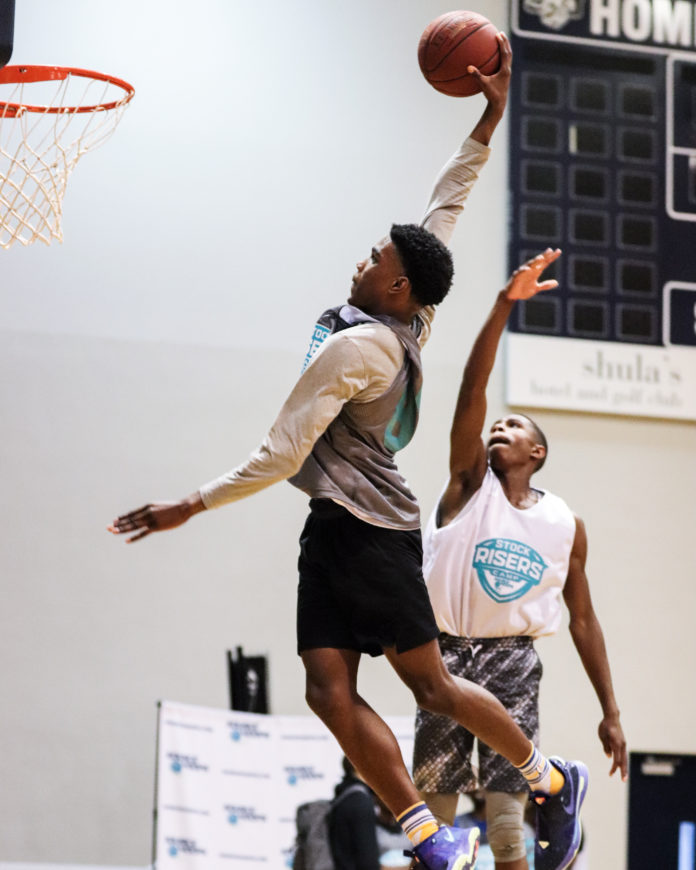 Jasai Miles, Miami Country Day School: The 6’5 freshman had a solid first year at MCD, averaging double figures and playing a big part in getting the team into the playoffs.  He is quite skilled for a guy his age and size.  He handles the ball well, has the ability to grab rebounds and push the ball up the floor in transition, and does a good job of keeping his head up and surveying the floor when going to the basket.  Miles is a respectable shooter from beyond the arc with his feet set.  His ability to score between the arc and the block will improve as he physically matures.  A good athlete with length, he shows a lot of potential on the defensive end.  Miles already plays with good instincts off the ball and is alert to jump into passing lanes for deflections and steals that he turns into scores.

Braylon Burbridge, Weston Sagemont: The 5’9 freshman was highly productive in the game we observed.  He began the contest by breaking down the defense then finding teammates for easy scores.  As the contest progressed, Burbridge unleashed a highly accurate perimeter shot that extends past the three point line.  Despite his size, he also showed that he could get to the rim and finish in a crowd.  Not overwhelming athletically, Burbridge is solid with the ball and plays with savvy and intelligence.

Jason Jackson, Sarasota Riverview: As good as the 6’2 freshman was at a different event on Saturday, he was far better on Sunday at the Stock Risers Camp.  The main reason being he proved that he could facilitate while not taking away any of his dynamic offensive capabilities.  While most players call for ball screens, Jackson actually waves them away, using elite level speed and quickness to get by defenders and score at the basket.  Once he becomes a reliable three point shooter and more adept at using ball-screens, Jackson becomes a high-level recruit.  That should certainly happen sooner rather than later.

Anthony Floyd, Hialeah Mater Lakes Academy: The 5’8 freshman is quick on quick, using his speed to push the pace at every opportunity.  He repeatedly got past opponents on Sunday and wisely used a floater to score over helping defenders.  He overcomes any size issues with confidence and a take no prisoners attitude on both sides of the floor.  Hopefully, as we see Floyd play more in the next few years, he will unveil a reliable jumper as well as a propensity for getting teammates open shots after breaking down the defense with the dribble.

Jamai Tejada, Hialeah Mater Lakes Academy: The 5’10 freshman teamed with Floyd to lead a very young Mater Lakes team into regional play this past season.  On Sunday, it seemed like Tejada was focused on playing the pure point guard role, making good passes in transition as well as to cutters in half-court sets. He didn’t shoot a jumper in the contest we watched but he did have a couple of “and one” opportunities during the course of the game.  Tejada is fast with the ball and an aggressive on-ball defender.  He’s another player who we hope to see develop a consistent perimeter shot in the future.

Anthony Dozier, South Miami: The 6’0 freshman impressed with his length, speed, and quickness at the event.  He proved to be quick to the basket regardless of game tempo and made good decisions with the ball on the move.  Dozier is a good rebounder for his size and can be a disruptive defender thanks to his quick feet and wing span.  We don’t recall him contributing in the South Miami games we saw this past season, but we certainly see him contributing for the Cobras going forward.

Andruw Rondon, Hialeah Mater Lakes Academy: The 6’5 freshman is in the process of transforming his body from fleshy to fit.  He has a solid frame, good strength, and seems to understand that what he is now, an undersized power player, is the best way he can help his team and impact the game.  Rondon scored reasonably well inside on quick post moves and putbacks.  He was alert for wayward passes into his area and quickly got the ball up the floor to teammates.  Rondon also was effective as a rim protector, more due to timing than explosive athleticism.  His skill development will be interesting to watch the next couple of years.