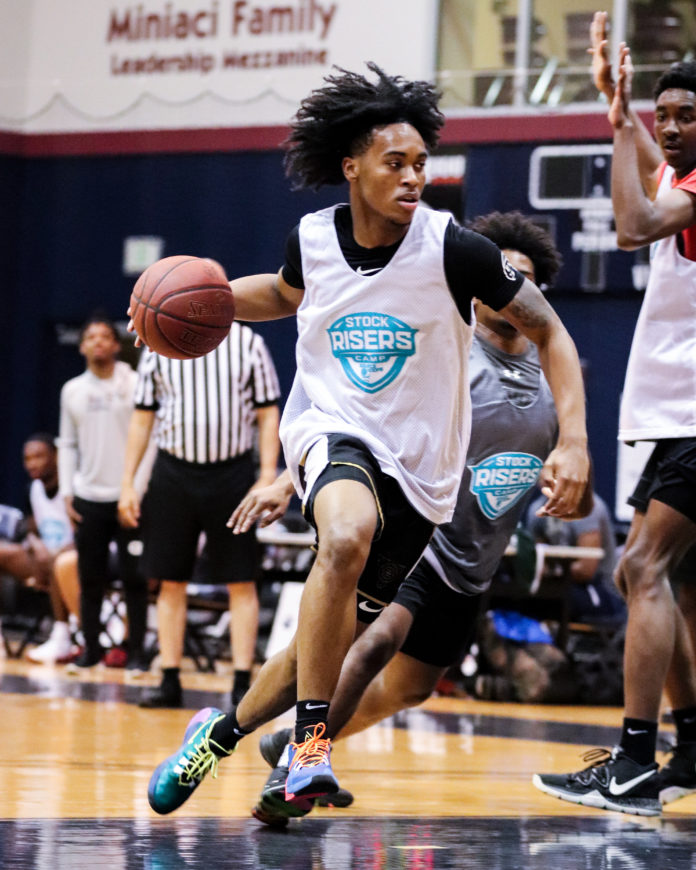 Wesley Cardet, Oakland Park Northeast: The 6’5 junior displayed every bit of his multi-faceted game Sunday.  He defended with determination, pursued rebounds at both ends of the floor, showed an ability to score from all three levels, and made the right reads with the ball in his hands.  Cardet can still be considered more of a slasher than a shooter when it comes to scoring prowess but his jumper was on target this time around.  There is a great chance that Cardet’s name will greatly rise in the Class of 2021 national rankings by the end of the April live period.

Jahvon Smith, Miami Norland (pictured above): The 6’4 senior was solid in our viewing of him and seemed to play a bit more relaxed than when we saw Norland during the high school season.  Much of his scoring came via getting to the basket and completing plays in a crowd, earning and completing a couple of three point play opportunities.  Later in the contest, he knocked down a couple of jumpers from the perimeter, showing promise with that part of his game.  Defensively, Smith is solid and has enough size and strength to contribute in the rebounding department.

Isaiah Josue, Hialeah Mater Academy: The 6’3 senior has speed to spare when it comes to the transition game and getting to the basket.  Not considered a knock-down shooter, Josue was in the contest we watched, dropping three of four from distance.  He handled the ball well in traffic and quickly got the ball to open teammates for shots.  Defensively he was solid as he has long arms and quick feet.

Cedrick St. Jean, Miami Schoolhouse Prep: The 6’1 senior is a two-way player that plays with great effort all game long.  He’s very quick defensively, gets a lot of deflections, and is able to stay in front of all but the quickest of guards.  Offensively, he’s at his best when the came is uptempo, but has a quick burst to the basket when the game slows into a half-court setting.  Not really one to set up teammates but he’s solid with the ball vs. pressure and generally makes good shot vs. pass decisions.

Nathan Montaque, Somerset Academy Charter: The 6’6 senior  had a bit of a slow start on Sunday but eventually came around to what he has excelled at the past four years: connecting on jumpers and pursuing rebounds at both ends of the floor.  He has the size and shooting range to play the “2” and the rebounding skills and physical toughness to play and defend the “3” position.  Montaque generally takes care of the basketball and makes good decisions playing out on the perimeter.

Alex Perry, Port Charlotte: The 6’4 sophomore was quite impressive in our first viewing of him.  He has a good body for a young player, plenty of athleticism, and plays with energy and enthusiasm.  Perry is very adept at finishing above the rim in transition and is a good straight-line driver with a quick first step.  Due to the up and down nature of the game, Perry didn’t have the opportunity to show an ability to score from the perimeter.  Hopefully, he has that in his bag of tricks.  He also had a couple of nice passes for assist, proving to be an unselfish player.  Perry’s leaping ability allows to compete against bigger players for rebounds and brings the right mindset to the defensive end of the floor.