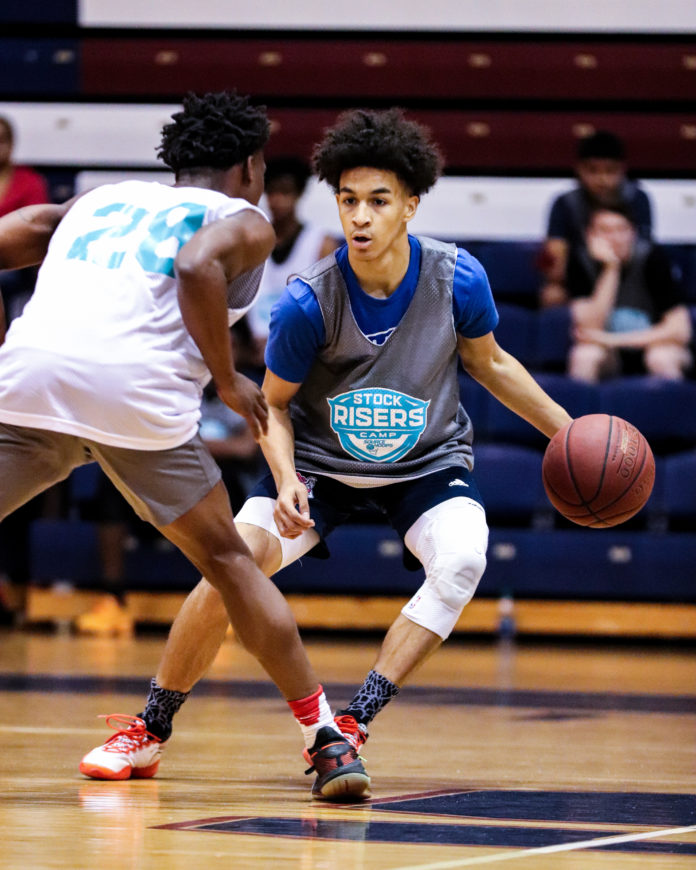 The Source Hoops Stock Risers Camp took place Sunday at St. Thomas University in Miami.  The event was well-attended by much of South Florida’s top talent from the classes of 2020 thru 2023.  We will be providing reports throughout the week re-capping the talent on display.

Ange Dibwa, Miami Triple Threat Prep: The 6’10 senior showed right from the start of the event that he was there to make a statement.  Strong and powerful, Dibwa dominated the glass at both ends and made opposing players re-consider their decision to attack the basket.  He has some basic post moves but still needs to improve in that area.  Dibwa gets up and down the floor well in transition and doesn’t mind playing physical at either end.  In an era where bigs get their points via ball-screens and lobs, he’s ideal for programs that prefer their “big” to play that way instead of posting up on either block.

Mathew Bewley, Oakland Park Northeast: Watching the 6’8 freshman play, it is just extremely difficult to believe that he has three more years of high school left.  He is a prototypical player for this age of basketball as he has length, excellent run/jump athleticism, and skills that allow him to play inside or out.  Bewley is a solid straight-line ball-handler and if given an opportunity from the high post or short corners will get by defenders with a dribble or two and finish well above the rim.  Despite a hitch in his shot, he is still a consistent perimeter shooter to around sixteen feet and will knock down the three on occasion.  Bewley has a quick first, second, and third leap for rebounds, and is quick to challenge opponents in the paint.  His quickness, wingspan and later foot speed allow him to defend any player of any size anywhere on the floor.

Jehu Wright, Miami Schoolhouse Prep: The 6’8 junior surprised onlookers quite a bit with his skill set.  He showed solid form on his jump shot with fifteen foot range and also the ability to drive the ball from the wing and score.  He needs to gain strength to finish through contact, but that should come in a rather short amount of time.  A good athlete with length, Wright is able to defend out the perimeter, switch out and defend wings on ball screens, and is quick and alert enough to help and recover to protect the basket and challenge open shooters.  No question there is still work to be done on both body and game, but Wright certainly made believers out of many on Sunday.

Ryan Bewley, Oakland Park Northeast: The twin of Mathew, his ceiling is just as high and future just as bright as his brother.  While maybe not as assertive on the offensive end as Mathew, Ryan exhibits the same skill sets.  One of the best things about him may be that he doesn’t float around the perimeter and looks to get inside for rebounds, lobs, and putback opportunities.  When given the opportunity, Ryan also knocks down mid-range shots and attacks the basket with a quick one or two dribble drive.  Their hasn’t been a set of twins like this on the basketball map since the Morris twins were at Kansas early in the last decade, and the Bewleys may be better!

Jordan Cooke, Miami Country Day (pictured above): The 5’9 junior proved to be one of the more dynamic scorers in the gym on Sunday.  He opened the contest we watched by repeatedly getting to the basket and finishing creatively in traffic.  Once the defense adjusted, Cooke did as well, knocking down deep perimeter shoots off both the catch and the dribble.  He tossed a couple of nice passes in transition but proved most effective when looking to score.  Cooke has tremendous speed and quickness with the ball in his hands and generally makes good shot vs. pass decisions.  He was one of Miami-Dade’s leading scorer’s this season and led his team to the playoffs, proving that he can get things despite his size.

Serge Beauvoir, Miami Triple Threat Prep: Simply put, it was not possible to keep the 6’2 senior from getting to the basket and scoring.  His combination of strength, speed, and quickness is exceedingly rare.  He’s not just a straight-line driver either as Beavoir has enough juke and jive moves to throw off the best of on-ball defenders.  He explodes off the floor to finish well above the rim, usually with authority.  Yes, there is a question as to his ability score from the perimeter and make jump shots, but if no one can keep you scoring layups, why take a jumper?  Beauvoir had a couple of assists when penetrating the lane but more often than not he is going to look to score.  His physical gifts help him on the defensive end but he needs to move his feet more and reach less, something that will no doubt be instilled in him at the next level.

Sterling Young, Fort Lauderdale Calvary Christian: The 6’3 senior was another player that proved to be highly proficient and taking the ball to the basket and scoring with relative ease thru contact in traffic.  While not as powerful and explosively athletic as Beauvoir, Young is quite quick, has an array of change of pace/change of direction dribble moves and a soft touch with either hand.  Young also has a solid jumper that extends to the three point line, making him hard to guard.  Defensively he’s solid as he moves hit feet well and is quick to get into the passing lanes to disrupt the offense.  Young could be one of those late signees after the April live period that becomes a solid contributor to a rising program.

Kemari Brown, Lauderdale Lakes Boyd Anderson: The 6’4 senior had a very good outing on Sunday, displaying not only a reliable perimeter jumper but also an ability to size his solid frame and strength to score at the basket.  Brown has plenty of athleticism, but uses his strength more than quickness to get by defenders and finish.  While not a traditional point guard, Brown is a solid ball-handler and passer.  He is quick to convert steals into scores, either passing the ball ahead to open teammate or beating the defense down the floor on his own.  With his strength and athleticism, he helps out quit a bit in the rebounding department.