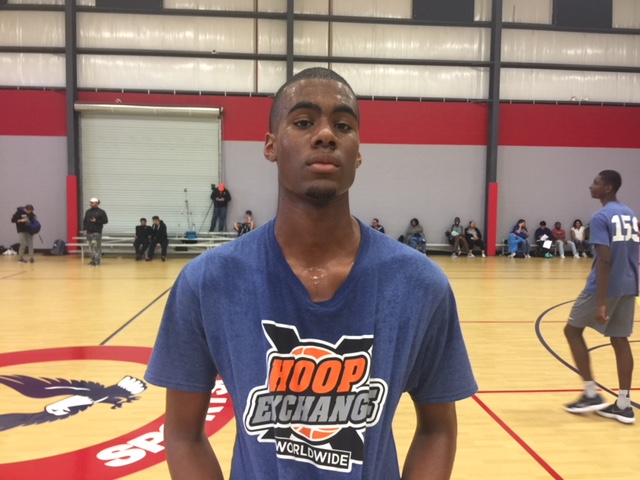 6’6 freshman Makai Willis out of Tallahassee FSU School was solid.  He was active around the basket and showed he could make shots out to fifteen feet with frequency.

A superior run/jump athlete, 6’5 soph Kario Oquendo from Titusville dominates in an uptempo game.  An explosive straight line driver, Oquendo gets to the rim quickly and finishes with authority.

6’1 Ocoee sophomore Sadeem Blake was a revelation.  A quick and athletic perimeter player, he came across as a guy that can score at all three levels as well an active defender.

A freshman starter on state 5A runner-up Ocala Trinity Catholic, 6’1 Jarvey Gainey proved to be a consistent threat from beyond the arc.  He’s got some length to him, so it won’t surprise if he gets taller in the next year or two.

NaVuan Peterson, a 6’4 sophomore wing out of Orlando Edgewater, shot the ball well from distance in the game we watched.  He also is a solid athlete and should help the Eagles next year.

The up-and-down tempo didn’t necessarily allow Lakewood’s 6’9 soph Jamille Reynolds a chance to establish himself in the post.  However, he continued to run the floor, track down misses for putbacks, and provide a challenge to opponents at the rim.

Alston Andrews, a 6’6 sophomore out of Ocoee was quite active around the basket at both ends on Saturday.  He has a quick leap and a knack for getting to offensive rebounds.

Just 5’9, Port Orange Atlantic sophomore Jordan Sears compensates with speed and an attacking mentality with the basketball.  He has deep range on his shot and has quick hands and feet on the defensive end.

Tre Gilliam, a 6’0 sophomore out of St. Pete Gibbs, scored at a high rate during the high school season.  His jumper wasn’t falling early Saturday so he made up for it by getting into the lane and making good decisions as far as shot vs. pass.  Gilliam was also an active defender, pressuring the ball full-court.

Jarred Hall of Tampa Wharton and Dontaye Strawtor of Riviera Beach Inlet Grove, are unique prospects.  Standing 6’10 and 6’9 respectively, they each have strong frames with the physical ability to dominate the paint.  Both need a lot of work, not only skill-wise but in conditioning their bodies.  However, patience with these two prospects should pay off in the long run.

Another promising youngster out of the FSU School in Tally is 6’5 freshman wing Kai Farlin.  He’s long, runs the floor, and is an active rebounder.

Arguably the most athletic prospect on Saturday day was DME Sports Academy’s 6’2 sophomore Mayoum Mayoum.  The overall skill level is questionable but his speed up the court and ability to finish well above the rim is not.

We saw Charles Crews, a 6’0 freshman out of Seffner Strawberry Crest during the season and were intrigued.  He didn’t disappoint here as he proved to be a smart player that scored well at the rim and didn’t try to do things that he is not yet capable of.

A double-figure scorer as a freshman at East Lake in Tampa, 6’3 Dean Gabrelcik showed a nice touch on his jump shot out to the arc and a willingness to battle bigger players for rebounds, winning those battles more often than not.

Jax Ribault’s Myles Smith was a big producer on Saturday.  The 6’4 soph is a slasher that plays bigger than his size.  He excelled in the uptempo setting, finishing in traffic at the basket and getting quickly off of his feet for rebounds at both ends.

A starter as a freshman at Wekiva in Orlando, 6’5 Michael James is another player that gets a lot done on the interior.  He’s strong, athletic, and aggressive.  He scored the ball well from fifteen feet and in and snatched rebounds with authority.

Van Wilkes, a 6’5 soph out of Winter Park, played unselfishly and proved to be a crafty passer.  Wilkes also shot the ball well from beyond the arc.

Eric Butler made the trip all the way from Smith Station in Alabama and performed well.  He’s a strong and athletic wing that finished well thru traffic at the basket and was also a decent passer.

Tucked away in Avon Park, 6’4 soph Eric Brown made many sit up and take notice.  A strong wing, he proved to be a better than expected passer.  He scored well in transition and drew several fouls when driving to the basket.

A 6’5 sophomore out of Lake Minneola, Robin Danes showed a solid skill level and was a much better than expected athlete.  He was effective both inside and out but has the skill level to play full time on the perimeter.