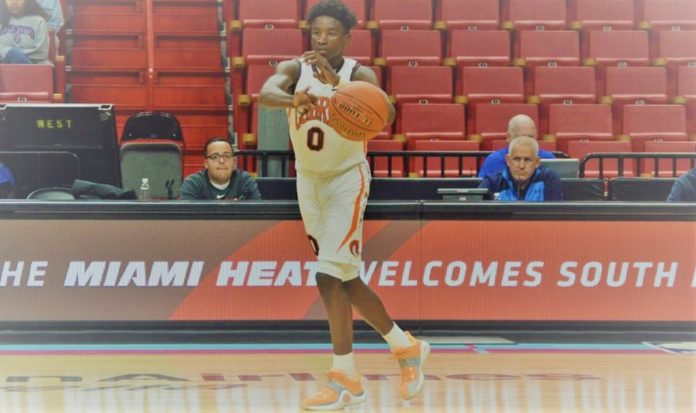 Tre Mann, The Villages Charter: The 6’4 University of Florida signee was very impressive in The Villages win on the road over Ocala Trinity Catholic.  Mann dropped seven shots from well beyond the arc on his way to 31 points in various ways: off the catch in transition; dribble-step backs; freeze a defender with a shake and then rise and score; pull ups coming off of ball screens…you get the picture.  Mann also showcased quick dribble moves to get into the lane as well as body control and touch to finish in traffic at the rim.   An under-rated passer, he had four assists in the contest and would have finished with at least three more if those shots had fallen by his teammates.  He was clearly motivated in the matchup, and that took his performance to another level.

Jarvey Gainey, Ocala Trinity Catholic: The 6’2 sophomore was impressive in his own right on Friday night against The Villages, dropping 28 points in oft-spectacular fashion.  He scored from all three levels and often created those scoring opportunities on his own.  Gainey connected on shots a good two-three steps behind the line.  He is crafty with the ball when going to the basket and is adept at using ball-fakes and reverse pivots at the end of drives to create room to get off his shot.  Gainey has a generous wing span and he uses it to great advantage on the defensive end as well as when going after rebounds.  Physically, he looks like he could get taller and fill out much more.  Words like “upside” and “high ceiling” were made for Gainey.

R.J. Taylor, Fort Lauderdale St. Thomas Aquinas: The 6’1 senior certainly deserves mention with his performance at the RMF Respect event this past Saturday.  Taylor shot like the rim was 18 feet in diameter instead of 18 inches.  Dropping 9-11 threes is tremendous shooting, regardless of the level of competition.  While not quite NBA range, the shots certainly weren’t with toes near the line either.  While most were off the catch, Taylor did have a couple of quick pull-ups off the dribble as well as a couple of driving scores when the defense over-played for the shot.

Shane Hunter, Fort Lauderdale St. Thomas Aquinas: While the 6’9 senior and Nova Southeastern commit may have only scored nine points in the contest, he filled up the stat sheet in other ways.  He grabbed eight rebounds, handed out four assists, and sent back a pair of shots by American.  Hunter is not the athlete that some bigs are, but then again it is unlikely that those bigs have the fundamentals, skill, and basketball IQ of Hunter.  His two older brothers were All-Americans at their respective small schools and it would be a shock if Shan didn’t follow in those footsteps.

Justin Neely, Miami High: A well-built 6’5 sophomore, Neely had an impressive 17 point/15 rebound outing Saturday against Coral Springs Charter.  He scores the ball very well inside the arc, using his frame and strength to over-power opponents to get the shot he wants.  Neely finished off tough drives in traffic, knocked down pull-up jumpers in the 15-18 foot range, and posted up smaller defenders when mismatched.  Though he missed the lone three-point shot he took, Neely has good form and mechanics.  While he didn’t show to be an explosive run/jump athlete this time around, Neely certainly knows how to use what he’s got and does so quite well.

Taderrius Davis, Miami High: Davis is physically the exact opposite of teammate Neely: A rail-thin 6’6 sophomore, he’s got lots of hops and length.  Davis has an eye-blink quick first step to the basket and scores at and above the rim before the help can get there.  He finished with a couple of finger rolls that would have made George Gervin smile.  While Davis didn’t shoot a jump shot the entire game, he made his foul shots so that gives some hope to his perimeter scoring skills.  Maybe the biggest surprise was his skills as a passer.  Davis had a couple of nice assists to cutters during the contest.

James McBride, Miami High: Another sophomore at “The High”, the 6’0 McBride was more solid than spectacular.  He was sound in handling the basketball and running the offense.  McBride showed he could score from the perimeter but also attack the basket and finish in both transition and half-court situations.  McBride may not get the notoriety of Neely and Davis but his solid play is crucial to the Stingarees’ success.

Malik Reneau, Hialeah Mater Academy: A 6’6 freshman just isn’t supposed to able to do what Reneau did on Saturday.  Scoring 34 points against Western, Reneau showcased footwork, post moves, and a soft touch that just are not found at any level in this “long ball” era.  Whether posting up on either block or operating facing the basket from the high post and short corners, Reneau simply knows how to take advantage of the defense and score.  Armed with a jump hook, spin moves to baseline and middle, up-and-under moves, and a consistent shot out to fifteen feet, Reneau is simply a tough matchup.  Add in the fact that he is a solid rebounder and rim protector and you have a freshman with the world at his feet.

Damari Monsanto, Davie Western: The 6’6 senior is undecided as to his college choice, but he has no shortage of options.  After going for 25 points and 10 rebounds against Mater Academy, don’t be surprised if more schools come calling.  Monsanto started off the contest hitting deep three after deep three.  Those shots weren’t just coming off the catch; step-backs off the dribble, reading and rising up over ball-screens, and quick pull-ups off the dribble over an off-balance defender all got the crowd into the contest.  Monsanto also showed he can score over smaller defenders in the mid-range and finish thru contact in traffic at the basket.  Big with a solid frame, he’s quicker than he looks, especially on the defensive end.

Brandon Sanders, South Miami: The 6’10 junior made quite the splash on Saturday night.  While his three points, all from the free throw line, may not impress, his 12 rebounds, 7 blocks, and completely changing the opponent’s offensive scheme while in the game, certainly do.  While thin, Sanders is long, quick off the floor for boards and blocks, and is fast up and down the floor in transition.  He had little opportunity to show any offensive skills but his form and success at the free throw line give hope.  He is very similar to the likes of Duwan Hernandez (formerly Huell) and Juwan Durham when they played high school hopes in the Sunshine State.

Arturo Dean, South Miami (pictured above): A 5’9 sophomore, Dean is the younger brother of Toru Dean, a four year starter for South Miami and a Barry University commit.  With 25 points in Saturday’s contest, Arturo loudly proclaimed that he has next.  He shot the ball very well from the perimeter, both inside and outside of the arc.  Dean also beat the defense down the floor to score in transition, often coming up with a steal and racing the other way.  When given the opportunity to run the offense, he was solid with the basketball and pushed the pace at every opportunity.  He’ll most likely grow to his brother’s size (6’1 or so) and his recruiting profile will grow along with him.