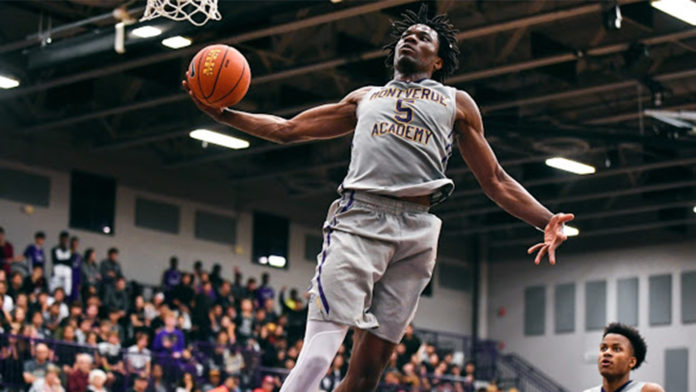 Rancho Christian has become a national program with the presence of the 6’9 senior Isaiah Mobley, a McDonald’s All American Game selection, and 7’0 junior Evan Mobley.  The younger Mobley is considered the top player in the national Class of 2020 and possibly the top prospect regardless of class.  The Eagles of Montverde have a roster deep with talent and by all accounts this should be a highly competitive affair.

Precious Achiuwa of Montverde put back a miss to score the game’s first points.  On Rancho Christian’s next possession, Evan Mobley was fouled and converted one of two free throws.  Cade Cunningham knocked down a mid-range jumper coming off a ball screen for Montverde to make the score 4-1.  Isaiah Mobley brought Rancho to within two when he hit one of two from the foul line.  A three from Montverde’s Harold Beverly was answered with a driving layup from Jordan Montgomery.  With 4:30 left to play, the score was 7-4 and the game looked to be one of those that would be tense and tight all the way.

Then Montverde exploded on a 15-3 run to blow the game open.  Achiuwa had six of those fifteen while Cunningham added four points.  After one quarter of play, the Eagles were flying high, up 22-7.

In the second quarter, Rancho Christian was at least able to keep pace with Montverde.  Montverde scored thirteen points in the period while Rancho tallied twelve on their end.  Still, that meant that the Eagles held a commanding sixteen-point lead at the half, 35-19.

If Rancho Christian was to make a run to get back in the game, it would have to be at the start of the third quarter to give themselves enough time.  That didn’t happen as Montverde slowly but methodically extended their lead.  With 3:45 left in the third, the margin was twenty at 52-32.  It would only get worse from there as Montverde finished out the quarter with a 10-3 run, highlighted by a lob to Balsa Kaprovica.  Entering the final period, Montverde had a commanding 62-35 lead.

Early in the fourth quarter, Dariq Whitehead of Montverde knocked down a three to give the Eagles their largest lead of the contest at 69-37.  Rancho Christian would respond to keep the running clock from kicking in, but ultimately, Montverde would go on the win in convincing fashion by the score of 79-56.

The Eagles were led by Achiuwa with 25 points as well as 10 rebounds and 4 steals.  Cunningham added 12 points while Moses Moody tallied 10 points.

For Rancho Christian, Evan Mobley led the way with 13 points while both Dominick Harris and Montgomery each contributed 11 points.