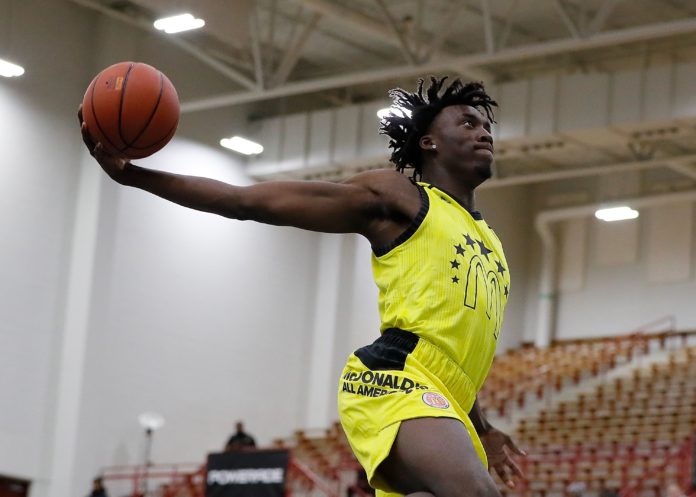 For high school basketball in Florida, this may have been its finest season.  Many things took place that have put Florida programs and players on a pedestal.

It started back in December when NSU University School became the first school in Florida other than Montverde Academy to win the prestigious City of Palms Classic since the glory days of Miami Senior in the late 90s-early 2000s.  By outlasting top ten ranked programs such as McEachern out of Georgia, Mater Dei out of California, and Memphis East, the Sharks announced their presence on the scene and vaulted into the top five.  Not only that but Scott Barnes, a 6’7 sophomore from U-School became the first sophomore to ever earn the MVP award for the event.

Fast forward to March and the Sharks finished with a Class 5A state title and only one loss.  That setback was to national #2 and powerhouse Oak Hill Academy.  With a sterling record, “U-School” was offered and accepted an invitation to the Geico Nationals.

Montverde Academy entered the season at #1 in all the national polls.  Taking on a national and international schedule, they won games in locales such as China, Hawaii, South Carolina and New Jersey against nationally ranked competition.  The Eagles finished their schedule without a blemish, also receiving and accepting an invitation to the season-ending Geico Nationals.

Just a couple of weeks ago, Montverde’s R.J. Barrett was named the Gatorade National Player of the Year.  That is akin to a college football player winning the Heisman Trophy.

In the most prestigious of all-star games, the McDonald’s All-American Game, 6’7 North Carolina signee Nassir Little from Orlando Christian Prep, rose above all of the other talented players on hand to earn the game’s MVP award.  He did it in stunning fashion, scoring 28 points, third all time behind Michael Jordan (30) and Jonathan Bender (31).

At the Geico Nationals, Montverde and NSU University School were placed on opposite sides of the bracket, seeded #1 and #3 respectively.  Montverde surprisingly struggled with Lone Peak out of Utah in the first round but then took care of business by soundly defeating Findlay Prep out of Las Vegas.  U-School took care of once-beaten Shadow Mountain out of Arizona, then earned redemption with a fifteen point defeat of Oak Hill.  Thus, an all-Florida showdown for the national title was set, a first between two schools from the same state.

Montverde took early command of the contest and won handily.  However, that loss by U-School shouldn’t drop them in the national polls.  R.J. Barrett was named MVP of the contest.

With their performances in front of national scouts and media, the play of Barrett and University School’s Vernon Carey, Jr, and Scottie Barnes just may have given players from Florida the #1 spot in their respective classes.  Barrett was already ranked #1 in the Class of 2018 and Carey’s performances, especially 29 points over Oak Hill, should solidify his #1 status in the 2019 Class for now.  Barnes is in the top five in most Class of 2020 rankings but his performance in all three games at the Geico Nationals should earn him the top spot for now in the sophomore class.

So, to put things in perspective, Florida has produced:

The #1 team in the country: Montverde Academy

The #2 team in the country: NSU University School

The MVP of the McDonald’s All American Game: Nassir Little, Orlando Christian Prep

The MVP of the Geico Invitational, The Gatorade Player of the Year, and consensus #1 prospect in the Class of 2018: R.J. Barrett, Montverde Academy

The top player in the Class of 2019: Vernon Carey, Jr., NSU University School

The top player in the Class of 2020: Scott Barnes, NSU University School

Doubtful that any other state will produce players and teams that achieve all of those accomplishments in one season any time soon, if ever.