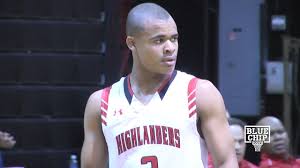 Our continuing coverage of the various district tournaments taking place this week found us at Trinity Prep in Winter Park for the Class 5A, District 6 semi-finals.  This district has historically been very competitive and this season was no different.

Thanks to the horrific traffic that permeates the metro Orlando area around five o’clock each weekday afternoon, it took over an hour to get to Trinity Prep.  Consequently, when we walked into the gym with three minutes left in the first quarter, Lake Highland was up 13-11.  Our presence must have “spooked” both teams as neither one scored the remainder of the quarter.  The second quarter was also a bit sloppy in terms of play as each team struggled to take care of the basketball and get good shots.  The two-point Lake Highland lead carried over to the end of the second period with the Highlanders up 23-21, still anybody’s ball game.

That scenario changed as Lake Highland outscored Jones 9-3 in the first half of the third quarter to build a 32-24 lead.  The Tigers of Jones got back to within five with just over a minute left in the period but a late three from Lake Highland made the score 39-31 heading into the fourth quarter.  The Highlanders built their margin to as much as twelve at 44-32 with 5:30 to play.  Jones would not be able to get closer that five with possession of the ball and Lake Highland moved on to Friday’s championship game by the score of 55-46.

For Jones, both Jelani Moreno and Javion Waters scored 11 points.

The Lakers of Windemere Prep came in short-handed as starters Shaquan Jules and Blake Stillwell were not with the team.  That in part explains The First Academy’s quick run to a 12-8 lead with three minutes in the first period.  However, by the end of the first, the margin was only a single point with TFA up 14-13.  The Lakers grabbed their first lead of the contest on the opening possession of the second quarter but TFA responded quickly.  Thus began a back-and-forth affair as the lead changed hands several times before the halftime horn sounded, at which point the Royals of TFA were up a single point, 30-29.

At the five minute mark of the third quarter, the score was tied at 36.  At that point, Windemere Prep put together a 7-0 run to give themselves some distance from the Royals.  They built that lead up to as much as ten late in the third but the Lakers’ lead was only seven at the end of the period, 55-48.  The First Academy got to within four at 57-53 with seven minutes to play, but then their well went dry.  Windemere Prep went on a 9-1 run over the next four minutes to lead by twelve at 66-54 with three minutes left in the contest.  The Royals fought valiantly but could not overcome that deficit in that short amount of time.  Windemere Prep moved into Friday’s final with a 77-67 victory.

The First Academy was led by Elmwood Tomlinson who did everything he could for the Royals to keep pace with 27 points.  Greg Gallon tossed in 15 points while Joe Delusio added 13 points to the cause.