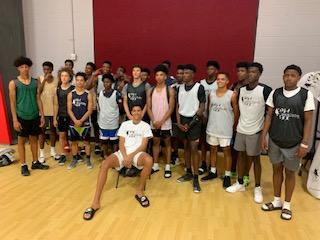 We took in the 2019 Best of the Best Elite Florida Showcase this past Sunday at the Cooper Palms Sportsplex in Apopka, just north of Orlando.  Traditionally one of the better fall exposure events, this year’s Best of the Best was no different. Over the course of the week, we will highlight some of the top performers from the event from the Classes of 2020 thru 2023.

Dimari Flynn, Port St. Lucie Centennial: The 6’3 wing repeatedly slashed to the basket, both in transition and against set defenses, and proved to be a high frequency finisher.  He has no fear of taking contact and will score in traffic with some serious body control and touch around the rim.  Just when we thought his game was limited to that, he knocked down a three coming off a ball-screen and looked very comfortable doing so.

Jimmy Bell, Cocoa: It seemed every time we looked up, the 6’3 wing was grabbing a rebound and quickly pushing the ball down the floor.  Bell repeatedly got into the paint and made things happen.  He proved to be an active offensive rebounder and alert defender that used his length and foot speed to make plays on that end of the floor.

Jonathan Mogbo, West Palm Beach Forest Hill: The 6’5 athletic guard proved to be a versatile offensive performer.  An effective shooter from beyond the arc, Mogbo also has a long and quick first step and gets to the rim before the defense can fully react.  He’ll score off the pull-up but craftily finishes at the basket with either hand if given a lane to the rim.  Mogbo showed glimpses of being a solid passer on the move as well as a tenacious on-ball defender.

There were a few sophomores that played up in the JR/SR Division and proved themselves more than capable of playing against upperclassmen.

Ausur Thompson, Fort Lauderdale Pine Crest: The 6’5 guard has both a high skill level and basketball IQ.  He is a multi-tool offensive player that can score from a variety of levels and angles, gets teammates the ball at the right time and place, and has a knack for corralling offensive rebounds and loose balls.  Though thin, he’s not afraid to challenge bigger guys inside at the basket.

Amen Thompson, Fort Lauderdale Pine Crest: The 6’5 guard and twin brother, he has all the same skills and intangibles.  At times, Amen seemed more comfortable in a set-up role, but he can certainly score if that is what the situation dictates.  At his size, he sees the floor over smaller defenders and makes good reads and decisions when heading to the basket.  His size and length also helps him on the defensive end when matched against smaller point guards.

Fray Nguimbi, Orlando West Oaks: The 6’7 wing solidified his reputation here after a breakout showing at the USF Elite Camp a few weeks ago.  He plays hard, attacks the glass at both ends and is fast up and down the floor in transition.  Nguimbi continues to improve as a ball-handler out on the perimeter and showed time and  again that he can get to the basket in one to two dribbles and finish thru contact at the rim.  His game will leap to another level once his perimeter jump shot becomes a weapon.

Moe Sabiu, Orlando West Oaks: The 6’8 forward impressed everyone in the gym with his workman-like approach.  He’s strong, is a good run/jump athlete, and doesn’t lose his mind trying to do more than he is capable of.  Sabiu is quick to the ball coming off the glass, powers thru defenders on post moves, and runs the floor hard.  Maybe the most impressive thing on Sunday was his ability to get tips and steals by keeping his hands up and active.  There is still a lot of skill development and game experience to be had for Sabiu, but his potential is undeniable.

We’ll focus on the 2021 Class in our next report from the Best of the Best Elite Florida Showcase.