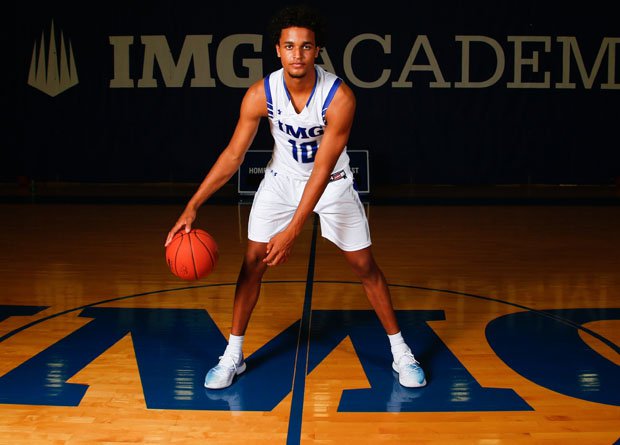 We spent a couple of days in Tampa at Carrollwood Day School checking out the action at the Sun Bash Tournament.  In only its second year, this event has established itself as a solid stop on Florida’s Holiday Tournament Circuit.

Santa Fe Catholic jumped on top quickly in this one.  With a minute left in the first quarter, they were up 12-2 and led 15-7 heading into the second period.  Santa Fe was up ten midway thru the quarter but Nature Coast made a run to cut it to five.  It looked like that might be the margin at the half but Santa Fe hit a three just before the buzzer to push the score to 31-23 in its favor.

The third and fourth quarters each played out like the first half.  In each quarter, Nature Coast would make a run to get within four or five, and then Santa Fe would answer with a spurt of their own to push the margin back near double figures.  Late in the fourth period, with Nature Coast having to shoot threes to catch up and foul to stop the clock, Santa Fe Catholic was able to extend their lead from the foul line and win by thirteen, 60-47.

Joe Stubbs, a 6’3 junior, and Javon Bell, a 6’4 junior were key for Santa Fe Catholic.  Stubbs finished 19 points and 6 rebounds while Bell tallied 17 points and 9 rebounds.

For Nature Coast, 6’4 junior Orien Adams was extremely impressive as he put up 25 points and 19 rebounds!  It might have been a 20-20 game but what looked like the grab of an airball miss and putback was deemed a lob by the announcer, thus depriving Adams of a twentieth rebound.

It was a “Battle on the Bay” between Carrollwood from the east side of the Howard Franklin Bridge and Canterbury from the west side.  It was a close contest for the first four minutes, which found Carrollwood on top 7-5.  A 12-5 run by CDS gave them a 19-10 lead after one period of play.  Canterbury answered with a 9-0 run to start the second quarter to tie the game at nineteen with 5:12 to play in the half.  At that point, CDS had had enough, outscoring Cantebury 18-2 over the rest of the second to lead 37-21 at the break.

The margin was eighteen after the third period and twenty midway thru the final quarter.  CDS would cruise to an easy victory by the score of 71-49.

Malcolm Whitlow, a 6’0 senior paced Carrollwood with 22 points while 6’4 senior Edgar Zieglar was just behind him at 21 points for the contest.

Arguably the premier game of the first day of the tournament both Choctaw (7A) and Booker (6A) are viable contenders for state titles in their respective classes this season after reaching Lakeland last year.  Despite a long bus ride from deep in the Panhandle, Choctaw jumped out to an 8-6 lead four minutes into the contest.  The rest of the first and all of the second was closely contested, but Choctaw never lost their lead.  However, Booker never let them get out of reach and at the half it was still anybody’s game with Choctaw up 36-32.

A 13-5 run by Choctaw to start the third quarter gave the Indians some breathing room and a twelve point lead at 49-37 midway thru the third period.  Booker was undaunted however, and worked furiously to cut the margin to just three at 55-52 heading into the final quarter.  Once again, Choctaw stretched its lead out, this time to nine at 64-55 with four minutes left.  Booker was again got the margin down to as few as four but time was running short.  Choctaw was able to spread the floor and run come clock, leaving Booker little choice but to foul to get the ball back.  Choctaw made the most of their opportunities from the line and would go on the win by ten at 75-65.

Both 5’10 junior Josh Williams and 6’7 senior Diante Smith were sensational for Choctaw.  Williams finished with 16 points and had the crowd buzzing with his quick and crafty ball-handling, as well as creative finishes at the rim.  Smith, a Texas Christian University commit, put together a marvelous stat line of 19 points, 11 rebounds, 7 assists, 2 steals, and 2 blocks.  Also, we have to give mention to 6’8 freshman Elijah Johnson, who contributed ten points with some nimble footwork and soft touch around the basket.

For those not in the know, SLAM stands for Sports Leadership And Management.  The Eagles of Edgewater got out to an 8-4 lead midway thru the opening period, but SLAM took a brief one point lead with 1:30 left in the quarter.  Edgewater hit a late bucket to go back up by one heading in the second period.  The score was tied at twenty-three with 4:20 left in the half, but the Eagles put together a 9-2 run over the rest of the period to lead by seven at 32-25 when the halftime horn sounded.

That spurt was what Edgewater needed to keep and maintain a lead in the second half.  SLAM pulled within five points a couple of times in both the third and fourth quarters, but each time Edgewater had an answer.  Edgewater advanced to the semi-finals in the Sun bracket by the score of 72-63.

IMG came into the game without the services of juniors Noah Farrakhan and Jaden Springer; essentially the team’s starting backcourt.  However, IMG’s roster is loaded with college prospects, so it was essentially “next man up” for the Ascenders.

On paper, Choctaw was certainly outmatched from a size and talent stand point.  However, the game isn’t played on paper and Choctaw really proved itself in the contest.  The Indians only trailed by four after the first quarter and by six at the half.  IMG made its superior talent felt in the third quarter, finally achieving a double digit lead at the three minute mark and leading by thirteen (44-31) heading into the final period.

IMG was paced by Josh Green with 21 points while Jeremiah Robinson-Earl had 15 points.

For Choctaw, their two headed monster of Josh Williams and Diante Smith proved they can play with anybody!  Williams finished with 21 points while Smith added 18 points.

Booker T.  came in severely short-handed as some of their best players also play football and they took part in the Under Armor All-American Game Combine held the same day in Tampa.  That left BTW with just six players suited up.

Still, that was enough to give the Victors of Miami Christian all they wanted.  Miami Christina led the entire first period but Booker T. took a 27-26 lead with four minutes to go in the second quarter.  Miami Christian got back on track shortly thereafter and led by a score of 39-34 at the half.

The Victors were finally able to push their advantage to double-digits in the third period and cruised to a 79-63 win.

Leading scorers for Booker T. Washington were unavailable but the play of Christopher Noel and Ames Dixon was certainly noteworthy.