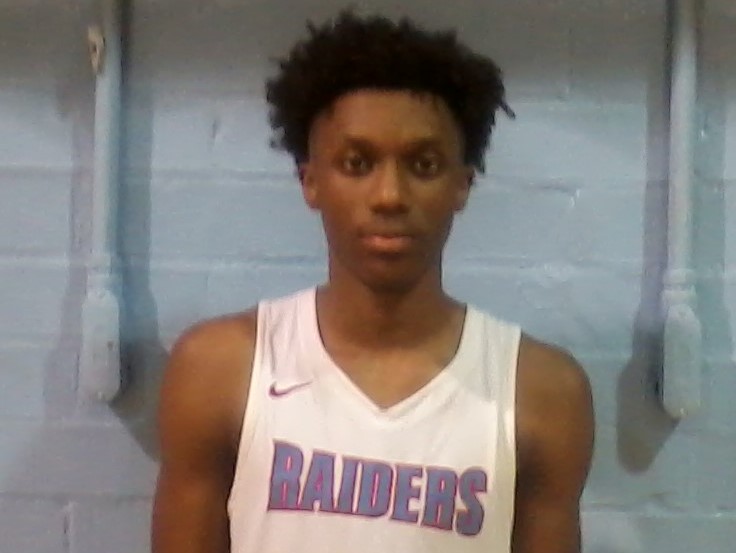 We headed to the Space Coast to catch the Class 5A Region 2 quarter-final game between District 7 runner-up Lake Wales at District 8 winner Rockledge.  The visiting Highlanders are a young group and this would be a tough test on the road against a solid Rockledge team that came in ranked #11 in the MaxPreps Class 5A rankings.

The first minute or so went well for Lake Wales.  Jalen Excell scored the game’s first two points in transition.  After Troy Patrick of Rockledge tied the game with a putback, Phillip Davis scored with a mid-range jumper to make the score 4-2 in favor of Lake Wales.

Rockledge reeled off eleven straight points as Jamar Franklin (pictured)hit back-to-back shots from beyond the arc, Patrick hit one of two free throws, Keion Brooke hit two free throws and Patrick scored in transition.  At the four-minute mark, Rockledge was up 13-4, forcing Lake Wales to call for a time-out.

Chris Dorsainvil scored a bucket inside to give Lake Wales some confidence, but Franklin scored on a lob and a bucket inside and Johntavious Thomas dropped in a three.  Now the lead was up to 20-6 for Rockledge.  Svastian Rosado got loose for a three to add to Lake Wales’ total but the first period ended with a driving scoring from Franklin to give Rockledge a thirteen-point lead, 22-9, after one quarter of play.  Franklin himself had outscored Lake Wales 12-9.

From there, the climb was just too steep for the young Highlanders to get back into the game.

Just past the midway point of the second quarter, Rockledge doubled-up the score at 32-16 and led 41-20 when the half-time horn sounded.

In the second half, Lake Wales actually played somewhat evenly with Rockledge.  The twenty-one point halftime margin only grew by one, 54-32, after the third quarter and by just three more in the final period.  Rockledge ultimately breezed to 75-51 win.  They will face #6 Auburndale in what should be a more competitive regional semi-final on Tuesday.

Rockledge was led by Franklin with 24 points.  Both Patrick and Jordan White each tallied 14 points.  In all, 11 of the 14 players listed in the Rockledge scorebook got points in the game.