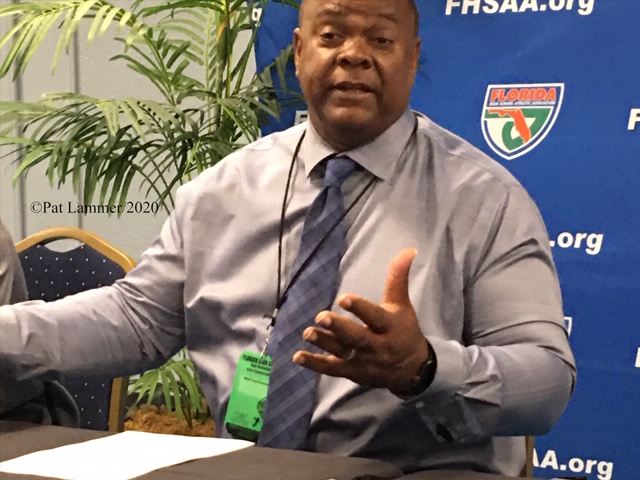 LAKELAND — Dillard’s bid for an eighth state championship under coach Darryl Burrows fell short for the second consecutive year.
Bartow took down the Panthers, 66-61 in overtime, in the Class 6A state championship game before an animated, full house at the RP Funding Center Saturday night.
Last year Dillard lost to Crestview in the Class 7A state championship game. It is the fifth state title for Bartow (30-1) and the second under coach Terrence McGriff.
“Tough game,” said Burrows (pictured), whose program won state championships in 2000-2003, 2008, 2016 and 2017. “We kind of put ourselves in a situation where we made it — taking nothing away from Bartow — but we had several opportunities to kind of close it out and we didn’t.”
Dillard senior Chandler Mack had a game-high 18 points and senior Asonaba Bromley posted a double-double with 14 points and 13 rebounds. Standout senior center Jalen Haynes was held to just 8 points and 5 rebounds.
Amarion Frazier led Bartow with 14 points, while Josh Simons and Jordy Lowery each had 12.
Dillard (19 of 45) and Bartow (19 of 46) shot almost an identical percentage from the field. Dillard missed 13 free throws (18 for 31) and turned the ball over 21 times.
With the game tied at 56, Dillard had two shots to win the game at the end of regulation. But Bromley and Mack’s jumpers bounded off the rim.

In the overtime period, Dillard grabbed a 58-56 advantage on a Haynes bucket with 3:03 to play.

2021 standout Walter Clayton then turned the momentum of the game when he scored on a driving layup and was fouled by Haynes. Clayton missed the free throw to leave the game tied 58-58. However, it sent Haynes to the bench with his fifth foul.
Lowery would give Bartow the lead for good with a driving layup with 2:27 to play in the extra session. After a traveling call on Bromley, Simons put Bartow up 62-58 with two free throws.
Bartow went up 64-58 on two free throws from Frazier.
Mack cut the margin to 64-59 with a free throw and Nick Bennett made two of three free throws to bring Dillard within 64-61 with a half-minute to play in overtime.
Dillard would get one final chance when Darryl Burrows — the son of the head coach — was fouled shooting a 3-pointer — down 64-61 — with 5.2 seconds to play.
Burrows missed the first two free throws and was called for a violation on the third attempt.
Tyrone Smith tacked on two free throws for Bartow with .4 left.
“[People said we’re just] Walt and Josh,” McGriff said. “And we said and told you we can’t win that many games — I think that’s 29 in a row. You don’t do that with two guys. Everybody just hung in there.”
Bartow’s previous state titles were in 1958, 1975, 1988 and 2010.
Dillard led 14-12 after one quarter, 34-28 at the half and 45-44 going to the fourth quarter.
Dillard had survived a double-OT thriller in the semifinals just to get to this one, nipping Lake City Columbia, 71-66.
The Panthers finish up 24-8.
If you have high school or travel basketball news, you can reach Pat Lammer at PatALammer@Gmail.com
Tags Bartow Chandler Mack Darryl Burrows Dillard FHSAA Fort Lauderdale Jalen Haynes Josh Simons Terrence McGriff Walter Clayton