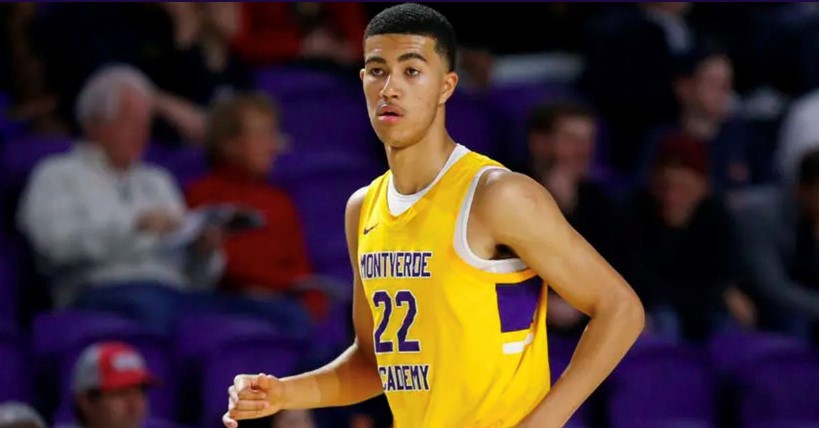 We took in a full slate of games at the All-American Jamboree held at The Big House in Tavares this past Saturday.  Hosted by Hoop Exchange, the event had talent throughout the Post-Grad and High School teams that attended.  Nearly forty different programs from across the country were represented and no doubt there were several players that attracted the attention of college coaches watching online on BallerTV.com.  In this first report, we will focus on some of the highs school squads that impressed.

Last season’s Montverde Academy team was hailed by many as arguably the top high school team in history based on the team’s high level of talent and even higher average margin of victory.  This year’s team will again have the weight of expectations but no doubt has the talent and depth to be one of the, if not the, top teams in the country.  We were most impressed with development of Langston Love, a 6’4 senior.  His shot-making was consistent both inside and behind the three-point line and he proved to be a better ball-handler and rebounder since we last saw him.  Creighton recruit Ryan Nembhard wasn’t flashy but doled out five assists and harassed opposing ball-handlers relentlessly during his time on the court.  Dariq Whithead, a 6’5 junior, continues to be a match-up problem with his ability to knock down shots from the perimeter as well as use his strong frame to muscle past defenders to score at the rim.  Caleb Houstan, a 6’8 re-classed senior, has one of the sweetest and surest strokes in the country at this level.  He is also a more rugged rebounder and engaged defender than we’ve seen in the past.  Jalen Duran, a 6’10 junior originally from Philly, was the lone newcomer to start with last year’s returnees.  Considered the #2 player overall in the 2022 Class, Duran dominates the paint with his athleticism and strength.  Off the bench but playing starter’s minutes, were 6’3 junior Justice Williams from Philly, 6’5 junior Jalen Hood-Schifino from North Carolina, 6’7 junior Malik Reneau from Miami and 6’9 senior DaRon Holmes from Arizona.  Both Justice and Williams are athletic and versatile backcourt performers.  Each has a sure jump shot, gets to the basket quickly and finishes thru contact.  Reneau is in the process of developing his perimeter game and while the results will take some time to show up, he still makes an impact with his rebounding and scoring ability on the interior.  Holmes is long, athletic, and can defend almost any position on the court.  He is also swift up the floor in transition and can play in the paint or out on the perimeter.

Orlando Christian Prep has dominated Class 2A for more than a decade and judging from their two games on Saturday, that is not likely to change any time soon.  Our over-reaction to their performance is that the bench for OCP may be the second-best team in 2A this coming season.  In our minds, OCP’s most impressive performer on Saturday was 6’4 junior A.J. Brown.  A rare player that understands what the defense is giving him and takes it, Brown scored in a wide variety of ways.  Ven Allen Lubin, a 6’7 junior and last year’s Class 2A Player of the Year (he’ll get serious competition from Brown for that award this year) continues to be Tim Duncanesque in his quiet ability to stuff a stat sheet.  His perimeter skills continue to improve and he’s become much more of a factor in creating points on his own.  Omar Figueroa, a 6’0 senior, is a deadly marksman from deep but also crafty at getting into the lane and scoring, as well as being a sneaky defender.  We had not planned to discuss the play of 6’3 sophomore K.J. Robinson at the point or 6’8 senior Camden Easley in the middle but both were in the starting lineup and made a significant impact.  Robinson was solid with his ball-handling vs. pressure and defending the ball while Easley pursued rebounds in and out of his area and challenged players in the lane.  Jayden Hastings, a 6’9 sophomore, was highly productive off the bench, grabbing rebounds with authority at both ends and showing solid offensive post moves.  Ocypher Owens, a 6’6 senior, brought energy in the form of defense, rebounding, and perimeter shooting.  Josh Blazquez, a 5’10 senior, pushed the pace, collapsed the defense, and made good decision on the move.  A pair of freshmen, 6’3 Isaiah Brown and 6’0 Ameer Ramadan, got plenty of playing time and didn’t look out of place.  Brown shot the ball well and wasn’t afraid to venture into the paint and physically go after rebounds.  Ramadan shot the ball with confidence from the perimeter and challenged defenses by going strong to the basket.

WAS (aka Westminster Academy)

The group was only eight players deep and missing some key pieces but still it is clear that they will be a tough out when it comes time for the Class 3A playoffs.  The strength of the team lies on the interior, anchored by 6’10 junior Ben Middlebrooks.  One of the better players nationally in the 2022 Class, Middlebrooks is a new age power forward that can step out and shoot the three, score inside, and/or put the ball on the floor for a couple of dribbles and convert at the rim. A rugged rebounder that controls his area, Middlebrooks is quick to get the ball up the floor to start the break.  That is, if 6’9 sophomore Jaylen Carey hasn’t already snatched it and pushed it up the court.  Carey showed some perimeter game, but he made the biggest impact when he was able to get the ball inside and simply overpower defenders unlucky enough to be caught between him and the rim.  Carey and Middlebrooks are deadly as a high-low combination.  James Nichols, a 6’5 senior, is a slasher out on the wing.  He uses his strength to overpower defenders and finishes creatively at the basket.  As his jump shot continues to improve, so will his scoring opportunities.  Aiden Abell, a 6’5 junior, was thrust into the role of point guard due to absences and injuries but did an admirable job.  A gifted shooter, Abell should combine with both Carey and Middlebrooks for a potent inside/outside combo as well as cause defenses headaches with ball-screen action.  The other players did an admirable job Saturday night, but look to be role players once the season kicks into gear.

This group arguably had the most difficult two-game schedule of anybody on Saturday:  Orlando Christian Prep then West Oaks Academy.  On top of that, the group was down a pair of key players.  David Mazon, a 6’6 senior, was unavailable while 6’4 senior Curtis Butler was walking around on crutches with a knee wrapped in an Ace bandage.  Both will be available and ready to go when the season starts in November.  That left 6’8 senior John Solomon, 6’7 senior Jayven Millien, and 6’3 sophomore Jason Jackson to carry the load.  We were impressed with Solomon, who played in Arizona last year but returned home for his senior season.  He scored well from fifteen feet and in, made the occasional three, and was active on the glass at both ends of the floor.  Solomon is also much more athletic than when we saw him two years ago.  Millien is tantalizing with his athleticism, length, and potential.  He’s a streaky perimeter shooter but makes the greatest impact in transition or on the offensive glass.  When Millien is in the flow of the game, he is an exciting player to watch.  Jackson was one of the breakout players of the summer but struggled in the contest we watched.  Surprisingly, a player with his quickness, ball-handling skills, and ability to get to the basket was playing off the ball.  More likely, when Butler and Mazon return, Jackson will be the one orchestrating the offense.