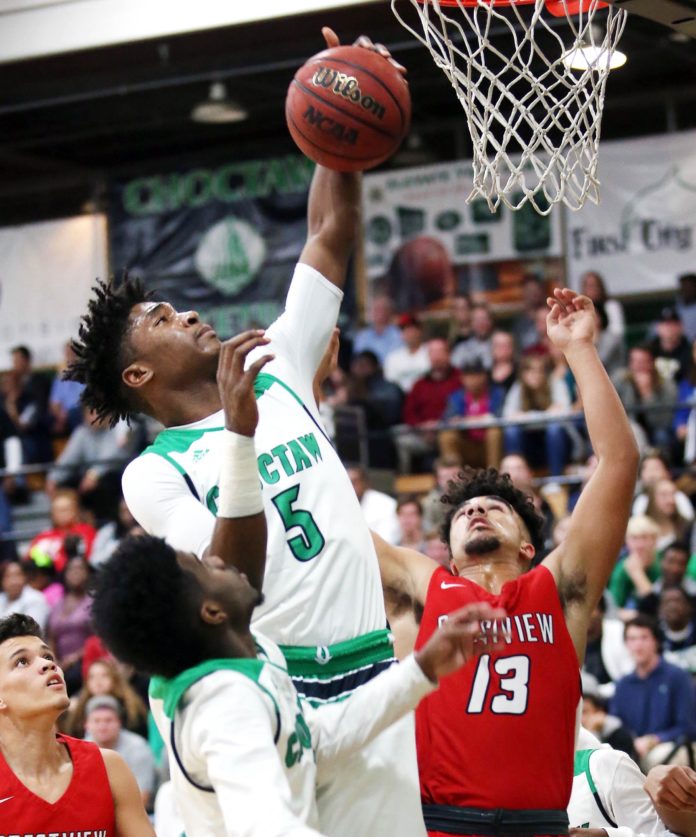 Choctaw returns most of its significant players from last year’s runner-up in the classification.  It will help to have do-everything performer 6’6 Diante Williams back for his senior season.  He nearly had a triple-double in last season’s semi-final win and has led the team in points, rebounds, assists, steals, and blocks each of the past two seasons.  Also returning is 6’0 senior guard Josh Williams, a guy that can push the pace offensively and get in your face on the defensive end.  District foe Crestview will be a challenge and regional stalwarts such as Pensacola, Gainesville, and Ocala Vanguard have the potential to upset Choctaw if the Indians don’t play at the top of their game.

Hillsborough made it to the semi-finals last year but were turned away by Choctaw.  This year the Terriers are armed with one of the better frontcourts in the state.  6’9 senior James Pursely and 6’5 senior Joshua Gloster are two transfers that will play alongside 6’7 senior Xavion Lockwood to bring major college size to the floor.  In contrast, Charlotte will have one of the better backcourts in the classification with 6’4 senior Ahmad Johnson, 6’2 senior Makai Reeves, and 6’1 junior Tyrik Gainor.  It seems like its Dillard’s turn to take another trip to Lakeland.  The Panthers have a good shot a doing so behind the frontcourt combo of 6’7 senior Makere Williams and 6’7 junior Jaylen Haynes.

The 6’6 Williams is one of the most versatile players in the state this season.  At some point this season, he’ll end up playing all five positions on the court.  He produces no matter where he lines up.  He has excellent perimeter skills, makes good decisions with the ball, gets the ball where it needs to go, is a sneaky rebounder on the offensive end and covers a lot of ground with quick feet and good instincts on the defensive side of the ball.  He’s committed to Texas Christian University.

At 6’4, the senior Johnson plays a lot of point guard for Charlotte.  He finishes drives well at the basket and his outside shot must be respected.  Williams is an active inside presence for Dillard.  The 6’7 senior has some length and quickly gets to the ball coming off the rim.  He has developed into a solid scorer from fifteen feet and in.  Brown, a 6’7 senior, is thin and much prefers to play on the perimeter.  He’s dangerous in pick-and-pop situations and can stretch the defense past the three point line. The 6’7 Ferrell has a good skill set for a player his size.  He’s a solid catch-and-shoot guy from beyond the arc, can grab rebounds and push the ball up the floor on the break, and scores well off the bounce from the high post and short corners.

Carol City always has a cadre of athletes at its disposal.  Their district and region has been a minefield since classifications expanded to nine and Carol City has been unable to get out of the regional round since.  However, they have always been a tough challenge to everyone they have played.  This year should be no different.

A good set-up guard, the 5’10 senior does a great job of pushing the pace and often finds teammates for easy baskets.  Though slight of build, he’s both fast and quick with the ball, and does a good job of surveying the court to find the best possible option.  He was first-team all-county last season as a junior.