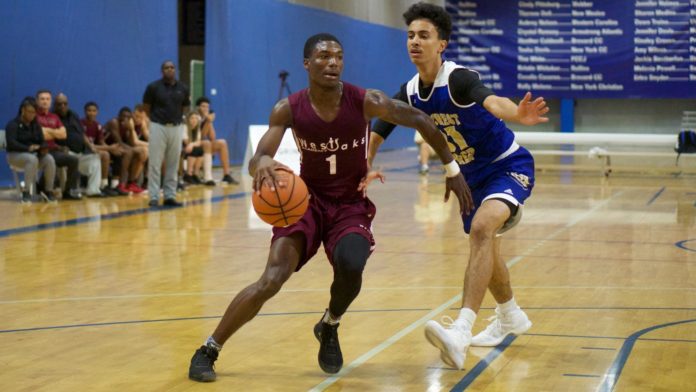 Without solid guard play, success on the basketball court is hard to come by.  It becomes much more difficult to advance the ball, score, or contain the other team on the perimeter without it.  With that in mind, we take a look at what we think will be some of the better backcourts this coming high school season.

This trio of talented guards will no doubt keep IMG Academy in the national spotlight.  Green, an Arizona commit, is a native of Australia and is an athletic wing.  He excels when the pace is uptempo but he proved over the summer that his perimeter shooting is not to be overlooked and his ball-handling and passing skills are solid.  Springer spent the last two seasons in North Carolina before making his move south.  Another athletic wing, he has shown a penchant for completing “and one” plays when getting to the rim.  With his speed and quickness he gets a lot of steals and deflections on the defensive end.  Springer is considered a top ten player in the national 2020 Class.  Farrakhan acquitted himself well in the EYBL, playing up on the 17U circuit.  Originally from New Jersey, Farrakhan routinely blows past defenders, does a solid job of getting his teammates involved and plays with a competitive edge on both ends of the floor.

Marte and Palermo have been big contributors to Osceola’s run of success the past three seasons, which includes a state title.  Marte is a consummate distributor, long distance shooter, and on-ball defender.  He also has a knack for taking and making big shots when the pressure is on.  Palermo does whatever it takes to win and is a consistent producer at both ends of the floor.  He is a skilled passer, shoots the ball well from mid-range and uses his high hoops IQ to get more than his fair share of steals on the defensive end.  Soto provides another perimeter shot maker, particularly from beyond the arc.  He’s also a crafty rebounder that finds ways to get to the ball before opposing bigs.

This group has big shoes to fill but certainly has the talent to do so.  Beverly, originally from Michigan, impressed everyone in attendance at the Fall Festival last month with his athleticism and ability to play either guard spot.  A highlight waiting to happen, he is quick to convert from defense to offense and convert turnovers into points.  He gets after opponents on the defensive end and impressed with his ability to slither to the basket and finish in traffic.  Cunningham comes to the Eagles from the Lone Star state.  He is a very good rebounder and an excellent passer and it is very possible that he could see time at the point guard spot.  Cunningham is more of a slasher than shooter at this stage of his development but that should pick up as he gets tutelage at Montverde.  Moody, a native of Arkansas, is a smooth perimeter operator with a deadly three point shot.  He’s strong and athletic, plays with passion on the defensive end, and has the ball-handling and passing skills to get teammates involved on offense.  Powell comes to the Eagles from the Bluegrass state and is a proven scorer from all three levels.  He’s another high hoops IQ guy that will help Montverde on the offense end as the Eagles don’t have an experienced, traditional point guard on the roster.

Last season, Montaque (13.4 ppg), Civil (17.1 ppg), and Renoi (14.2 ppg) combined to average just short of 45 points a contest.  Montaque has shown at various venues that he’s a solid scorer from mid-range and in.  Civil’s numbers suggest he’s more of a slasher than a shooter as he shot over 50% from the field and attempted only a handful of shots from beyond the arc.  We’ve been impressed with the play of Renois each time we’ve seen him.  An athletic point guard, he gets to the rim and finishes thru contact in traffic with great frequency.  As good as those three are, it’s the additions of Blackwell and Garcia that elevates the group.  Blackwell is a triple-double threat any time he steps on the court.  He might be too unselfish at the offensive end, where he is a great passer.  Garcia is seemingly always in attack mode and challenges defenses to stop him from getting to the basket.  It will be interesting to see how all of this talent meshes together as they play in arguably the toughest district in the state.

This group made a run to last year’s Class 5A final.  Pugh was the catalyst during the team’s run through the regionals.  He was named Marion County Player of the Year for his efforts.  He can score when necessary but also knows how to get and keep his teammates involved.  Leath is an athletic wing guard that has been known to heat up from beyond the arc and make several shots in succession.  He’s also quite strong, finishes well through contact at the basket, and completes his “and one” opportunities.  A starter as a freshman, Gainey played last season with a savvy that belied his youth. A very good shooter from three point range, he is also an active defender with a long wing span.

West Oaks has always played at a fast pace on both ends of the court and has had its share of quality guards.  However, this group most likely will take that to another level.  Jones, an Auburn commit, made a lot of noise in July with his ability to score on either side of the three point arc as well as tenaciously defend the basketball.  Smith provides another point guard option thanks to his speed and quickness with the ball as well as his ability to break down the defense and find open teammates for shot opportunities.  Petion is a long athlete with a host of mid-major offers.  Miguel shoots the ball well enough from the perimeter that his shot must be respected but he is at his best when attacking the basket, either in transition or on drives against a set defense.  Harris is another dynamic driver while Neal is a deadly shooter from beyond the arc.  With this kind of depth, West Oaks will make life difficult on both ends of the court for its opponents.