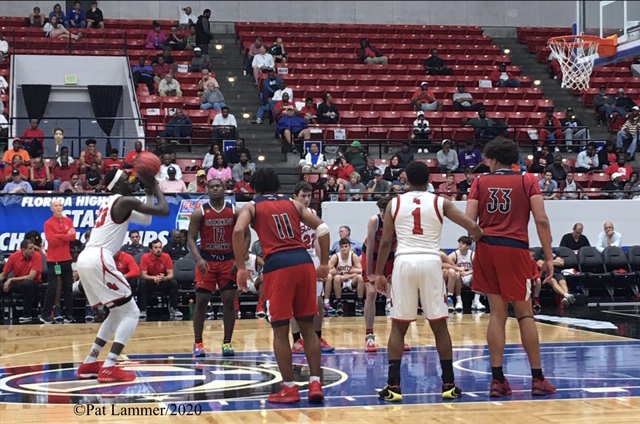 LAKELAND — The 2020 FHSAA Boys State Basketball Tournament tipped off Wednesday at the RP Funding Center with six games. The tournament runs through Saturday. Here are the top performers from Day 1:

The 6-foot-7 Lubin — who has scholarship offers from Alabama, Florida, Iowa State, St. John’s and USF — posted a double-double with 16 points and 15 rebounds vs. Tampa Bayshore Christian. The sophomore made 7 of 13 field-goal attempts and ripped down 10 offensive rebounds as OCP dominated the paint. “Coach would always say that we have to dominate the paint,” Lubin said. “I just kept going to the basket every time to get as many opportunities as I can.” Lubin plays travel basketball with Team CP25.

The 6-7 University of North Florida recruit was dominant with 29 points and 13 rebounds in the W over Vernon. 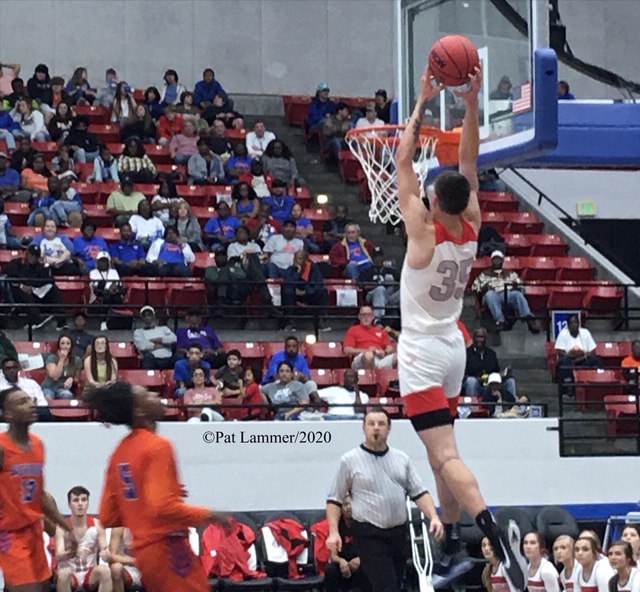 Crews connected on 9 of 19 shots from the field, including 3 of 8 from deep, and made all 8 of his free throws. He grabbed 7 offensive rebounds for 23-3 Hilliard and played all but 32 seconds. Of going up against a box-and-1 defense, Crews said, “You kind of adapt to it. That’s why I work so hard on being versatile from the inside and outside.” Crews said UNF recruited him since the eighth grade.

Johnson, a 6-4 junior, scored 14 points and pulled down 10 rebounds in the OT victory over Schoolhouse Prep. He shot 60 percent from the field (6 of 10). Despite being down double-digits at times Wednesday, Johnson said the Lions stayed together. “There’s been plenty of situations where we’ve been down a lot,” he said. “We trust each other. We make the extra pass.”

The 6-8 Minott was a key factor on the boards along with Basa-Ama with 10. He went 8 for 17 from the field and had 19 total points in helping the Scots win their 12th straight. Baylor, Georgia Tech and Oklahoma are among the programs talking with the junior, who will be playing for Nightrydas Elite on the Nike EYBL travel circuit.

The University of Miami football recruit led Chaminade in points (19) and rebounds (6) in the loss to St. Andrew’s. He was 6 for 11 from the floor, including three 3-pointers. American University recruit Johnny O’Neil had 17 points, including five 3s.

The Warner University recruit scored 15 points, dished out 7 assists and made several key free throws down the stretch in the W over Schoolhouse Prep. He went 7 for 8 from the free-throw line.

The senior, who has signed to play baseball at Northwestern, scored 22 points in the loss to Andrew Jackson. Beshears hit 6 of 12 from the field and got to the free-throw line for 11 attempts.

The native of NYC, in his first year at Schoolhouse Prep, made 6-of-11 field-goal attempts and finished with 15 points in the semifinal loss. “Last year, we were the underdogs,” SHP coach Colin Campbell said. “This year, we’re the hunted.” Cedrick Saint Jean also had 15 points for Schoolhouse, including three 3-pointers. Schoolhouse Prep was Miami-Dade County’s only entrant at state this year.

Fitzgerald finished with 21 points and 9 rebounds in the loss to OCP. The 6-2 Crews canned six 3s on the way to 20 points.

The 6-6 senior is the heartbeat of the club. He plays with a relentless attitude. West had 8 points, 11 rebounds and 3 blocks in the win over Community School of Naples. Andrew Jackson had six players score at least 8 points.

7:00 — 1A championship game: Hilliard vs. Hawthorne