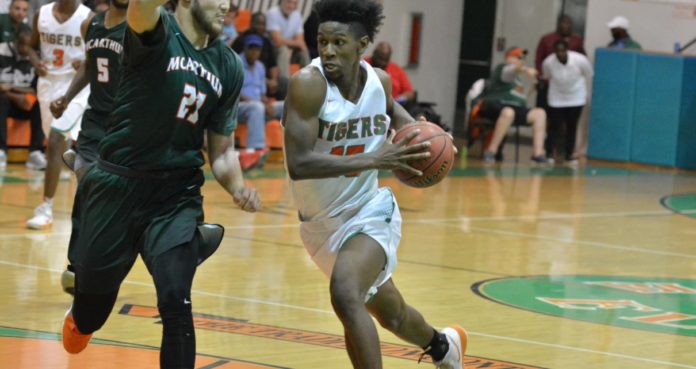 Arguably the most dominant program in the FHSAA since the turn of the century, Melvin Randall’s teams always seems to be reaching its peak at playoff time.  This year should be no different.  Joshua Scott, a 6’5 senior wing, was the MVP of the state tournament last season.  Now armed with a more accurate perimeter shot, he will be a do-everything performer for the Tigers.  As is usually the case with Ely, the whole is greater than the sum of its parts.  Names will come out of the woodwork that will push Ely to its usual level of excellence.  The team will certainly face tough competition along the road to Lakeland, but this pack of Tigers is expected to meet those challenges.

Last season, First Coast had high expectations entering the playoffs but were upset in the first round.  Despite the transfer of Nassem Khallid, First Coast still has enough players to make life chaotic for the opposition.  Most notable challengers in this region are Tallahassee Lincoln, St. John’s Creekside, and Orange Park Fleming Island.  Windermere may only be in its second year of existence but last season’s all-underclass lineup acquitted itself well.  The senior inside/out tandem of 6’7 Dakota Rivers and 6’2 Dante Love is solid and the supporting cast play their role well.  It is arguably the most challenging region in the classification as district foe Orlando Edgewater, Melbourne, Polk county stalwarts Bartow, Lakeland, and Winter Haven, along with Tampa’s Wharton and Sickles all have the potential and/or pedigree to reach states.  Much like First Coast, a solid Lakewood Ranch was ousted earlier than expected in last year’s playoffs.  While the returning team is young, expect them to play with a renewed purpose in order to make up for last year.  Regional rivals Plant City, St. Petersburg, and Tarpon Springs East Lake appear to be the most likely roadblocks in the region.

The 6’8 Anderson has been considered one of the top players in the Class of 2019 since the start of his freshman year.  Armed with an excellent shooting stroke from deep, Anderson is able to pull bigger players away from the basket and either shoot over or drive by them.  If a smaller player attempts to defend him, Anderson takes him inside and scores with either hand around the basket.  He’s also a tough rebounder and under-rated ball-handler and passer.  He’s headed to Big 12 country to play for Iowa State in the fall of 2019.

Scott has been a contributor all four years at Ely and has developed from an undersized rebounding specialist to a versatile all-around performer at both ends of the court.  He’ll guard the opposing team’s best player on one end and take and make the big shot on the other.  Scott defines the term “winner”.  Rivers is a long and bouncy forward that continues to make progress with his perimeter skills.  The majority of his points come in transition, set play lobs, and offensive rebounds.  However, his perimeter jumper is solid from inside the arc and he’ll make three pointers if given time and space.  Rivers is headed to Florida Gulf Coast to play his college ball.  Arguably the top shooter in the state, the 6’4 Green turned in sizzling performances this spring and summer into a scholarship to Central Florida.  Deadly off of catch-and-shoot situations (especially from the corners), Green shows improved skill in putting the ball on the floor for scores.  Phillips had a complimentary role on last season’s state runner-up, but this year he will be “the man”.  The 6’7 junior plays with a great spirit, motor, and enthusiasm.  He’ll also kick butt and take names around the basket at both ends of the floor.

The Yellow Jackets may not have any names of note (yet) but head coach Terrence McGriff annually puts together a squad that no opponent looks forward to playing.  Once again, the team will hang its hat on the defensive end and look to outwork the other teams in all facets of the game.

At 6’9, Hunter is a tough matchup, and not just because of his size.  His jumper is accurate to the three point line, he has basic but effective post moves inside, rebounds his area, and challenges shots on the defensive end.  Some may belittle a perceived lack of athleticism but Hunter’s skill and savvy more than make up for that.